From the Tri-City Herald:

WASHINGTON The House voted Thursday to hold two of President Bush’s confidants in contempt for failing to cooperate with an inquiry into whether a purge of federal prosecutors was politically motivated.

Angry Republicans boycotted the vote and staged a walkout.

(Oh, how I wished the steps of the Capitol had been really, really icy!)

The vote was 223-32 to hold White House chief of staff Josh Bolten and former White House counsel Harriet Miers in contempt. The citations charge Miers with failing to testify and accuse her and Bolten of refusing Congress’ demands for documents related to the 2006-2007 firings.

Republicans said Democrats should instead be working on extending a law – set to expire Saturday – allowing the government to eavesdrop on phone calls and e-mails in the United States in cases of suspected terrorist activity.

“We have space on the calendar today for a politically charged fishing expedition, but no space for a bill that would protect the American people from terrorists who want to kill us,” said Minority Leader John A. Boehner, R-Ohio.

“Let’s just get up and leave,” he told his colleagues, before storming out of the House chamber with scores of Republicans in tow. 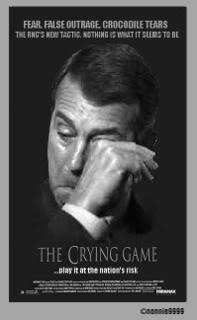 Democrats said they were acting to protect Congress’ constitutional prerogatives.

“No one is immune from accountability and the rule of law, not Harriet Miers or Josh Bolten, and especially not President Bush or Vice President Cheney,” said Rep. Robert Wexler, D-Fla.

The White House said the Justice Department would not ask the U.S. attorney to pursue the House contempt charges. However, the measure would allow the House to bring its own lawsuit on the matter.

Bush’s former top political adviser, Karl Rove, has also been a target of Congress’ investigation into the purge of prosecutors, although Thursday’s measure was not aimed at him.

The contempt debate sparked an unusually bitter scene even in the fractious House. Democrats accused Republicans of marring the Capitol memorial for their fallen colleague Rep. Tom Lantos, D-Calif., by interrupting it with a protest vote. GOP leaders shot back that it was Democrats who were responsible for dishonoring Lantos, by calling the House into session for the contempt debate before the service had ended.

It’s not clear that contempt of Congress citations must be prosecuted. The law says the U.S. attorney “shall” bring the matter to a grand jury.

On Thursday, three Republicans joined 220 Democrats to support the contempt resolution, including Rep. Walter B. Jones of North Carolina, presidential candidate Rep. Ron Paul of Texas and Rep. Wayne T. Gilchrest of Maryland, who was defeated this week in a primary. One Republican, Rep. Jon Porter of Nevada, voted “present.”