Dr. Laura Schlessinger has never been one to shrink from controversy, and she leaped headlong into one on Monday when she said that if a husband cheats, his wife may share some of the blame.

More commonly known as just “Dr. Laura,” Schlessinger made the remarks while participating in one of several panel discussions on TODAY dealing with the breaking news that New York Gov. Eliot Spitzer had been connected to a high-priced prostitution ring.

“I would challenge the wife to find out what kind of wife she’s being,” she said. “Is she being supportive and approving and loving? Is she being sexually intimate and affectionate? Is she making him feel like he’s her man? If she’s not doing that, then she’s contributing to his wrong choice.”

And Dr. Laura knows all about ending affairs! From Salem News:

Dr. Laura Schlessinger, right wing conservative radio host, is known for promoting family values. She is estranged from her mother, opposes birth control, has had her tubes tied. She espouses saving oneself for marriage, and admits to having had sex before she was married. She opposes adultery, but has committed adultery while she was married, and has slept with a married man. She opposes divorce, but she is divorced and remarried, and has posed for nude photos which are available online.

You remember her mother, don’t you? The mother who died in her home not far from her daughter’s radio station in 2002 and was not found for several months. Family values, indeed.
Oh, and Laura is a wonderful mother in her own right! From The Salt Lake Tribune:

The soldier son of talk radio relationship counselor Laura Schlessinger is under investigation for a graphic personal Web page that one Army official has called “repulsive.”
The MySpace page, publicly available until Friday when it disappeared from the Internet, included cartoon depictions of rape, murder, torture and child molestation; photographs of soldiers with guns in their mouths; a photograph of a bound and blindfolded detainee captioned “My Sweet Little Habib”; accounts of illicit drug use; and a blog entry headlined by a series of obscenities and racial epithets.
The site is credited to and includes many photographs of Deryk Schlessinger, the 21-year-old son of the talk radio personality known simply as Dr. Laura. Broadcast locally on 570 KNRS, “Family Values Talk Radio,” the former family counselor spends three hours daily taking calls and offering advice on morals, ethics and values. 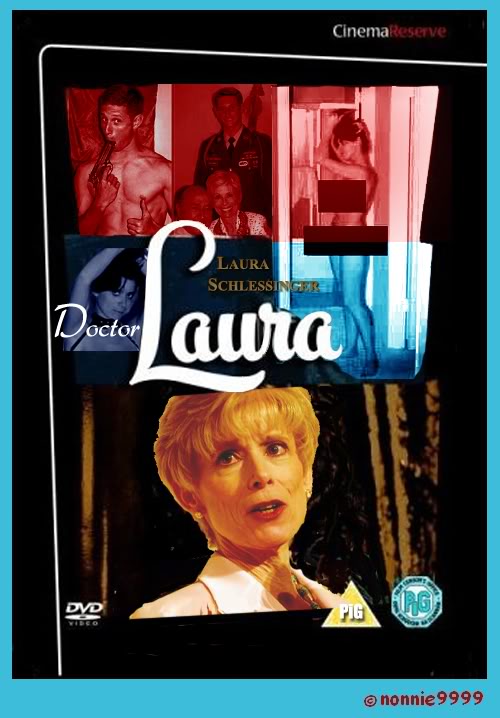 Original DVD cover.
(originally posted at BlatherWatch)
By the way, her Ph.D. is in physiology, not psychology.