A Musical Refrain for John McCain

WASHINGTON – Not content to sit on the sidelines, longtime senator and one-time presidential hopeful Orrin Hatch has penned a song for his Senate buddy John McCain in hopes of helping his White House bid.
Really, he did. 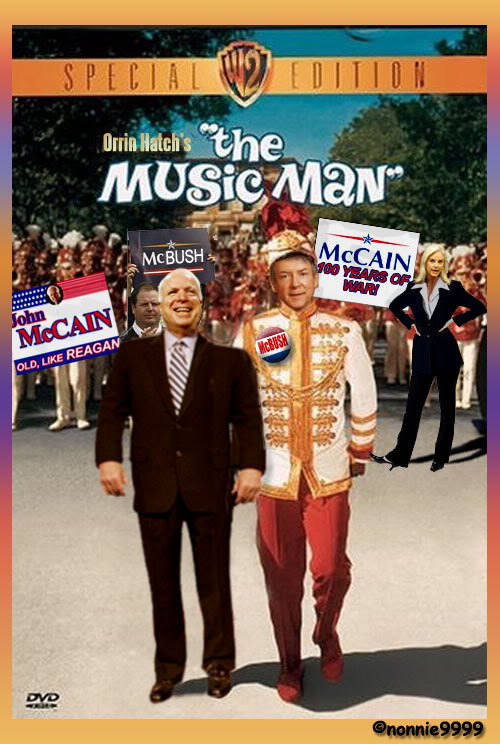 You know, kids, we had the McCain/Chimpy full body press, the constant McLiebercain manlove, the McCain/John Warner embrace, and the McCain/Tootsie Rudy squeeze (not to mention whatever the hell is going on with Lindsey Goo-Goo-Eyes Graham), and now Orrin Hatch is writing songs for Captain Underpants! He’s writing songs for him!! They may belong to the Party of Homophobia, but these guys are gayer than any of the gay guys I know!

“As everyone who reads The Tribune knows, I write lyrics, and I thought John would get a big kick out of a patriotic song written about his heroism and the sacrifices he’s made for our country,” Hatch said in a statement. “Plus, in the song, we express what he will probably have to endure while running for president.”
But it’s doubtful the McCain campaign is going to start playing Hatch’s song at rallies or dub it the official campaign ditty. But McCain’s camp thought the song was nice.

The song may soon appear on the iPod of MSNBC’s Chris Matthews, who first played a snippet on Hardball on Wednesday evening.
“I will be singing it on the pillow tonight,” Matthews quipped.

Hatch, a former Mitt Romney supporter, has also co-written songs for other well-known people, including a song called “The Difference Makes the Difference,” for Muhammad Ali and “Souls Along the Way,” for Sen. Edward Kennedy and wife Vicki.

I know you are all dying to see the lyrics! Note: this is not a song parody, this is the real thing:

Hey John
Come on
They’ll be calling you
Everything you’re not!

I don’t know about you, kids, but I can’t stop snapping my fingers and tapping my foot.
I think it’s a seizure.

14 responses to “A Musical Refrain for John McCain”