NEW YORK — Sen. John McCain (R-Ariz.) defended his attacks against Sen. Barack Obama (D-Ill.) during his appearance tonight on Comedy Central’s “The Daily Show With Jon Stewart” and suggested he might pick a fictional character from NBC’s “The Office” as his vice president.

Marking his 13th appearance on the show, McCain parried with Stewart on questions ranging from his Secret Service detail to his relationship with President Bush. The senator joked that he decided to announce his vice presidential choice on tonight’s show: Dwight Schrute, the assistant to the regional manager (or “assistant regional manager,” if you ask Schrute) in the Scranton branch of the faux Dunder Mifflin paper company. 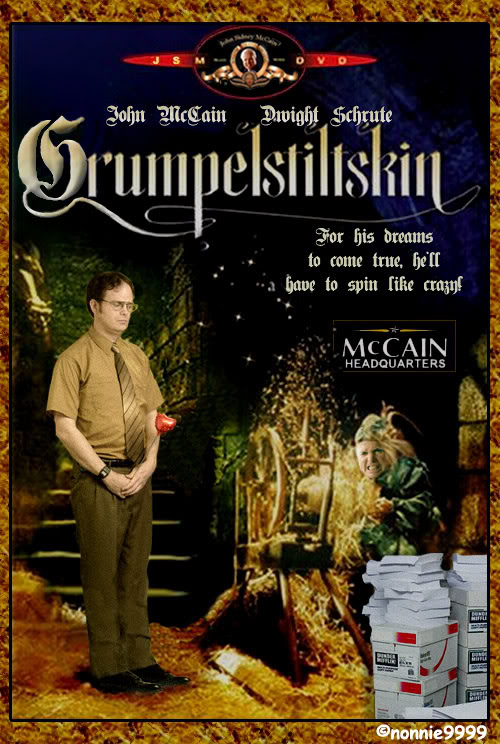 At points Stewart pressed the presumptive Republican nominee on more serious points, alluding to the fact that McCain had suggested in a fundraising letter that the Mideast terrorist group Hamas had endorsed Obama. McCain defended tying Obama to Hamas, saying, “The spokesperson said that.”

“And you take Hamas at their word,” Stewart observed dryly.

When Stewart drew comparisons between Obama’s controversial relationship with the Rev. Jeremiah Wright and McCain’s ties to someone the host described as first “a religious zealot” and then “a religious person”: President Bush.

“Will you take the opportunity to repudiate and denounce President Bush?” he asked, prompting a thunderous round of applause from the audience.

For the most part Stewart — who skewered Bill and Hillary Clinton, Obama and television pundits during the first segment of the show, under the heading “The long, flat, seemingly endless Bataan Death March to the White House” — took it easy on McCain, joking about the code name the Secret Service must use for him.

“My name is Jerk,” McCain said.

Stewart wasn’t satisfied with the supposed moniker. “McDreamy?” he inquired. “How about Grumpelstiltskin?”

And when McCain turned more somber at times, saying, “It feels really incredible, in all seriousness, to receive the nomination of the party of Abraham Lincoln, Teddy Roosevelt and Ronald Reagan,” Stewart was having none of it.

“You know those guys aren’t around anymore, right?”

If you are cable-less, you can watch the interview at the link above.