Aug. 31 (Bloomberg) — Senator John McCain defended Sarah Palin, his vice presidential choice, as a “soul mate” who will take on corruption in Washington, even as a growing chorus in the Alaska governor’s home state questioned her credentials.

“She’s a reformer,” McCain, the presumptive Republican presidential nominee, said today on Fox News Sunday. “I have watched her for many years; I’ve seen her take on her own party.” Asked whether Palin is the best person for the job, he said, “Oh yeah.”

He’s watched her for many years? She’s only been governor for a year and a half. Does he make it a habit of watching mayors of cities with populations less than 9,000, or is he just confused and is thinking of reruns of Northern Exposure he caught on Nick at Nite? 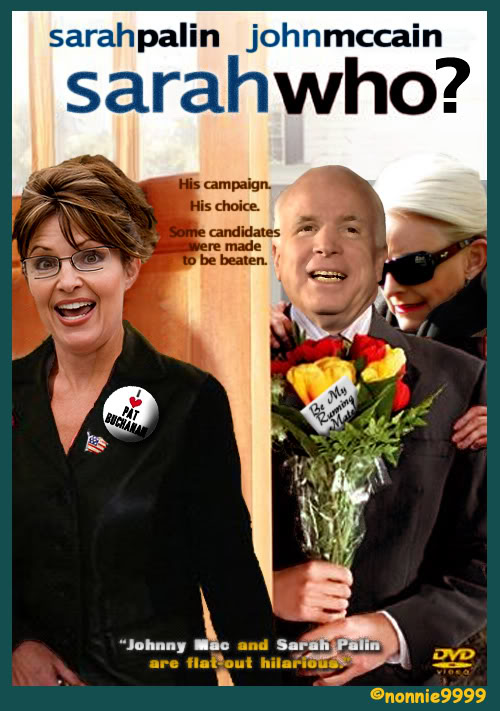 Still, some Alaskans — including a supporter of Palin’s 2006 run for governor and a former staff member — expressed reservations about the choice.

“She’s not qualified, she doesn’t have the judgment, to be next in line to the president of the United States,” Larry Persily, who until June worked in the governor’s Washington office as a congressional liaison, said in a phone interview yesterday.

A supporter of Palin’s campaign for governor, Jim Whitaker, the Republican mayor of Fairbanks, also questioned Palin’s readiness to serve as vice president in a phone interview yesterday.

Whitaker said that while he is “still an avid supporter” of Palin as governor, he will continue to back Democratic presidential nominee Barack Obama.

Palin, 44, is less than halfway through her first term as governor. Before her election to that post, she served on a state commission that regulated the energy industry and was mayor of the town of Wasilla, which had an estimated population in 2007 of 9,780, according to the U.S. Census Bureau.

Persily, who worked for three different governors in the state’s Washington office, said he left the job on good terms with Palin. He said he left out of frustration because the state was “fighting the same old wars” on trying to open the Arctic National Wildlife Refuge to oil development.

McCain contrasted what he said was Palin’s willingness to take on senior Alaskan Republicans like Murkowski and Senator Ted Stevens with Obama’s record.

She took on Uncle Ted? We’ll get to that later.

Palin spokesman Bill McAllister said on the same call that Palin is older than John F. Kennedy was when he ran for president in 1960 and that “of four people on two national tickets, she is the only one with executive experience.”

Yeah, it’s not like JFK had been a Senator for 7 years or in the House for 6 years before that! I bet JFK never ran the PTA!!

“Most people would acknowledge that, regardless of her charm and good intentions, Palin is not ready for the top job,” the newspaper wrote. “McCain seems to have put his political interests ahead of the nation’s when he created the possibility that she might fill it.”

The Anchorage Daily News, the state’s largest paper, noted in an editorial that Palin is enmeshed in a legislative investigation of her July 11 firing of the state’s public safety commissioner, Walt Monegan.

Oh, that bit about taking on Uncle Ted? Here’s a little something from the Governor’s very own official site that has been removed. Too bad for Sarah, but it cannot be scrubbed from the internets:

March 19, 2007, Juneau, Alaska – For the second time in less than a month, Governor Sarah Palin met today with the state’s senior Senator, Ted Stevens. This morning’s meeting was held in the Governor’s Juneau office.

During the meeting, Senator Stevens and the Governor focused on the AGIA [Alaska Gasline Inducement Act]. Many of those comments were reiterated during the Senator’s joint address before the Legislature soon after.

“It is so encouraging to hear again that Senator Stevens and I are singing from the same sheet of music,” said Governor Palin. “In his address, he pushed for action this year on a natural gas pipeline. I also have the Senator’s assurance that once the state has acted on the AGIA, our Congressional Delegation will do everything it can do to expedite the federal review of the natural gas pipeline project.”

From the Boston Herald:

ANCHORAGE, Alaska – When John McCain introduced Alaska Gov. Sarah Palin as his running mate Friday, her reputation as a tough-minded budget-cutter was front and center.

“I told Congress, thanks but no thanks on that bridge to nowhere,” Palin told the cheering McCain crowd, referring to Ketchikan’s Gravina Island bridge in Alaska.

But Palin was for the Bridge to Nowhere before she was against it.

The Alaska governor campaigned in 2006 on a build-the-bridge platform, telling Ketchikan residents she felt their pain when politicians called them “nowhere.”

The bridge was intended to provide access to Ketchikan’s airport on lightly populated Gravina Island, opening up new territory for expansion at the same time. Alaska’s congressional delegation endured withering criticism for earmarking $223 million for Ketchikan and a similar amount for a crossing of Knik Arm at Anchorage.

Congress eventually removed the earmark language but the money still went to Alaska, leaving it up to the administration of then-Gov. Frank Murkowski to decide whether to go ahead with the bridges or spend the money on something else.

In September, 2006, Palin showed up in Ketchikan on her gubernatorial campaign and said the bridge was essential for the town’s prosperity.

She said she could feel the town’s pain at being derided as a “nowhere” by prominent politicians, noting that her home town, Wasilla, had recently been insulted by the state Senate president, Ben Stevens.

“OK, you’ve got valley trash standing here in the middle of nowhere,” Palin said, according to an account in the Ketchikan Daily News. “I think we’re going to make a good team as we progress that bridge project.”

One year later, Ketchikan’s Republican leaders said they were blindsided by Palin’s decision to pull the plug.

Bert Stedman, a Sitka Republican who represents Ketchikan in the state senate, told the Ketchikan Daily News he was proud to see Palin picked for the vice-president’s role, but disheartened by her reference to the bridge.

“In the role of governor, she should be pursuing a transportation policy that benefits the state of Alaska, (rather than) pandering to the southern 48,” he said.

Businessman Mike Elerding, who helped run Palin’s local campaign for governor, told the paper he would have a hard time voting for the McCain ticket because of Palin’s subsequent neglect of Ketchikan and her flip-flop on the “Ralph Bartholomew Veterans Memorial Bridge.”