There was much excitement behind the scenes at the Rethuglican Convention! There was a lot of planning going on!

All of Captain Underpants’s lobbyists friends and advisers were there, including Karl Rove, Phil Gramm (who kept his hands over his ears, lest there be any whining! 😆 ), Randy Scheunemann, Joe McLieberman, Nicolle “the media sucks” Wallace, Lindsey-poo, and Charlie Black. Captain Underpants snoozes in the background until they wake him up to tell him what he honestly and truly thinks.

There were lots of luminaries of the Rethuglican party there, including the lovely ladies….

Oops! How could I forget this lovely lady, Roberta Underpants….

They didn’t let Roberta speak, except on film, where they could edit her, in case she made disparaging remarks about Mormons or something that might embarrass the party.

Captain Underpants’s former rivals for the nomination were there to suck up, because they had no choice if they ever want to run for anything again support their good friend, Captain Underpants…

…including Sam Brownback, Grampa Fred Thompson, Mitt Romney, Rudy 9/11 Giuliani, and Mike Huckabee. (Funny, Ron Paul wasn’t there. He used to hang out with the guys!)

His BFFs were warming up for their speeches backstage, too! No way would Joe McLiebercain and Lindsey-poo Graham miss a chance to blow Captain Underpants so they could get cabinet positions extol the virtues of their buddy! 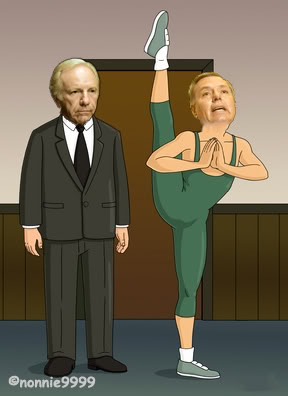 I hope you are enjoying our look back on the Rethuglican National Convention and will come back tomorrow for the final installment.