How much can go wrong in the two months before Mr. Obama takes the oath of office? The answer, unfortunately, is: a lot.

Yet economic policy, rather than responding to the threat, seems to have gone on vacation.

On the same day the government said it has supplied $33.56 billion to 21 banks in a second round of payments from the $700 billion rescue program, the Bush administration told congressional aides it won’t ask lawmakers to release the second half of the $700 billion, people familiar with the matter said.

The administration of President Bush ends in less than 10 weeks, and a delay in submitting a request to lawmakers would leave it to President-elect Barack Obama to tap remaining funds in the bailout fund.

Treasury informed Congress there would be no notification seeking the rest of the bailout funds this week, and didn’t go beyond that, a department spokesman said yesterday. Treasury Secretary Henry Paulson has no timeline for accessing the second $350 billion, the spokesman said.

The department has so far committed $290 billion of the $350 billion that was released for a program aimed at injecting capital into a wide spectrum of banks and insurer American International Group. Paulson’s initial proposal called for using that money to buy troubled assets from the firms, and he’s been criticized for shifting the focus of the program. Last week Paulson repeatedly declined to answer when and whether he would go to Capitol Hill for the rest of the funding.

He told The Wall Street Journal he is unlikely to use what remains of the package, unless a need arises.

Meanwhile, a broad economic stimulus bill, which Obama wants Congress to pass promptly, is not likely to be approved by the Senate during its short legislative session this week, a top Senate aide said yesterday.

From The Detroit News:

WASHINGTON — Detroit’s Big Three automakers must provide a detailed nine-point plan to Congress by Dec. 2 in order to win approval of $25 billion in emergency bridge loans and show that “top automobile executives (are) making significant sacrifices and major changes to their way of doing business.”

Congress will consult the Federal Reserve Board, the Bush Administration and Government Accountability Office in its review, the letter said.

Earlier Friday, Pelosi said Congress would act next month, saying doing nothing “is not an option.”

Democrats on Thursday called off a vote on a compromise bill largely written by Sens. Carl Levin, D-Detroit, and Kit Bond, R-Mo., that would have used a $25 billion Energy Department retooling program and drop the fuel efficiency requirements to grant automakers quick access to funds. The White House backed that proposal.

The White House blasted the decision of Congress to leave without reaching a deal, calling it “appalling.”

Instead, they told automakers to submit a detailed plan by Dec. 2 of how they will use the funds and how they will return to profitability.

Pelosi said today that the automakers could submit a joint plan or separate plans. Congress will return the week of Dec. 8 to approve the loans.

[Sen. Minority Leader Mitch McConnell, R-Kentucky] said automakers may have to consider other options if they can’t get money. “Otherwise it would be a private sector kind of solution,” McConnell said.

When Democratic leaders balked this week at handing over $25 billion in emergency loans to a flailing U.S. auto industry, they signaled some buyer’s remorse about the $700 billion financial industry bailout they approved just weeks ago.

“The context is this,” House Financial Services Chairman Barney Frank , D-Mass., said Thursday. “There is widespread dissatisfaction not just in the Congress, but in the country, with what is perceived to be a failure of the recipients of those [financial bailout] funds to carry out the intent that the Congress had. There is a sense that we did not do a good enough job of safeguarding the use of those funds, or providing prevention against abuse.

“And you could not get, I believe, through either house of Congress today what some people might think was a repeat. That’s why we need to take time, because you already have a great deal of skepticism on the part of the public, on the part of the Congress and in much of the media that we acted too quickly and didn’t do enough to anticipate problems.”

Frank was a leading congressional architect of the Troubled Asset Relief Program (TARP), the financial rescue plan (PL 110-343) that was rushed through Congress in just over two weeks at the urging of Treasury Secretary Henry M. Paulson Jr. The measure became law Oct. 3.

At the time, Congress expected the funds to be used by Treasury to buy up illiquid mortgage-backed securities that were clogging the books of banks and other financial institutions, in hopes that action would restore confidence in the viability of those banks and prompt them to resume lending.

But the Treasury Department instead decided to use the funds to inject billions of dollars directly into struggling banks and insurance companies, acquiring equity stakes in the companies.

Despite Treasury’s actions, banks have been slow to resume lending and credit remains tight.

Senate Banking Chairman Christopher J. Dodd , D-Conn., in an interview with National Public Radio on Friday, expressed “not only my frustration but the frustration of my Senate colleagues here over the pace of this movement and the direction that some of these steps are taking.”

Unless Treasury makes some changes, he warned, Congress will step in with more restrictions in January. “They know what they need to be doing, and they’re not acting responsibly, in my view. And if they don’t act responsibly, then I’m going to require them to act responsibly.”

WASHINGTON — President-elect Barack Obama will name Timothy F. Geithner, president of the Federal Reserve Bank of New York, to be his Treasury secretary, moving to fill a key post at a moment when the quavering financial markets are looking for reassurance about the direction of economic policy, people briefed about the decision said Friday.

Word of Mr. Geithner’s selection helped drive stocks sharply higher on Friday afternoon as investors concluded that Mr. Obama was taking steps to fill a leadership vacuum at a time when the economy and financial markets are showing new signs of strain. The Dow Jones industrial average closed up 494 points, a 6.5 percent gain after days of dizzying declines.

[Lawrence H. Summers, Treasury secretary in the final year and a half of the Clinton administration, a highly regarded economist, and a former president of Harvard University] would be the leading candidate to become the next Federal Reserve chairman should Mr. Obama choose not to reappoint Ben S. Bernanke when Mr. Bernanke’s term ends Jan. 31, 2010 [according to two Obama advisers].

In choosing Mr. Geithner, Mr. Obama would signal both a change at the Treasury Department and continuity in its economic rescue efforts. With the current Treasury secretary, Henry M. Paulson Jr., and Mr. Bernanke, Mr. Geithner — who as head of the New York Fed is the central bank’s eyes and ears on Wall Street — has been part of a troika that has struggled this year to contain the credit crisis.

“The markets will remain disrupted through Jan. 20 without some thoughtful government action,” said Todd Steinberg, head of equities and commodity derivatives at BNP Paribas Americas. “The naming of Geithner certainly increases the possibility of action for a couple of reasons: he is in the government in one of the most influential seats, and he is already actively in dialogue with the current administration’s decision makers.” 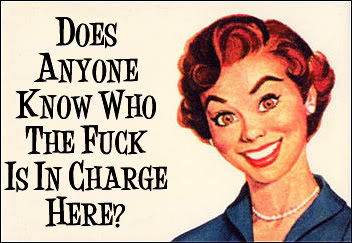 6 responses to “We don’t know where the buck stops, but that’s okay, because there are no bucks left!”