The *Untied* States of America, the Final Installment

Hey comrades amigos hosers mes amis meine Freunde i miei amici mijn vrienden kids! We’ve been exploring what 2010 will look like in the former U.S. of A. after the civil war predicted by Igor Panarin. We’ve covered The Texas Republic and Russian Alaska, the Central North American Republic, and Atlantic America. That, sadly, brings us to the end of our journey, as we consider what it will be like in The Californian Republic (TCR) as it becomes part of China and the new Japanese Hawaii. 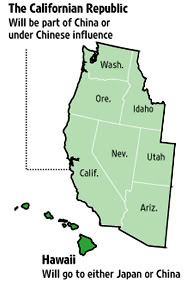 Just as the politicians at our previous stops are adjusting to the new reality, so are those in TCR. For example, Senator Bob Bennett of the former state of Utah is taking his ex-state’s values and adapting them to his new environs….

Hey! I bet that, an hour later, you want to discriminate against another minority group!!

Speaking of the former Utah, we can’t forget about Orrin Hatch! He’s doing what he can to get by, too….

Of course, when speaking of The Californian Republic, you can’t help but take a look at what used to be California! Here’s Governator Ahhhnold declaring himself Emperor of Grauman’s Chinese Theater while his scary lookin’ anorexic lovely wife and First Kennedy Lady, Maria Shriver, looks on….

Oooh! I think I see Senators Dianne Feinstein and Barbara Boxer out for a night on the town….

Meanwhile, John Ensign of the former Nevada, Mike Crapo from the former Idaho, and Jon Kyl and Captain Underpants John McCain of the former Arizona stand around, trying to look relevant….

If Captain Underpants John McCain looks a little cranky, it’s because he’s having trouble remembering that he has to say Pun yeou instead of my friends.

Now we come to the new Japanese Hawaii, tomodachi. I have to say that I really admire Senator Daniel Akaka! He’s 84 years old, and look at him putting on a brave face right before he has to mix it up with the younger guys….

Then again, maybe he’s just happy he didn’t get stuck with the same assignment that his friend and colleague, Daniel Inouye, got….

That makeup can be hell on octogenarian skin!

19 responses to “The *Untied* States of America, the Final Installment”