From the New York Daily News:

If Rush Limbaugh is the new face of the Republican Party, it’s a face with lots of scars.

Not so much the literal ones, but scars in the character that is El Rushbo[…] 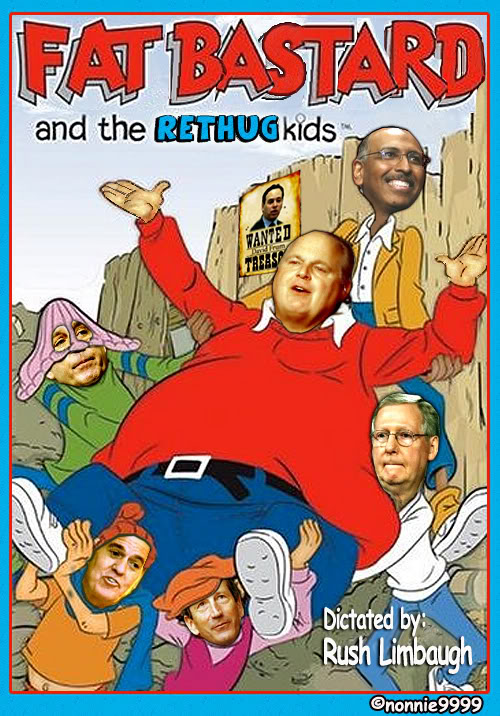 Rush Hudson Limbaugh 3rd, 58, is a thrice-divorced, formerly drug-addicted college dropout who casts himself as a working class hero, yet drives his $450,000 Mercedes-Benz Maybach 57S home to a 24,000-square-foot Florida mansion every night (one of five houses on the property).

He is a black-suited showman who can begin a speech with a joke about how he is not arrogant, as he did at the recent Conservative Political Action Conference – then use the words “I,” “me” or “my” 223 times over the next hour.

And, yes, he may be the closest thing to a leader in the currently headless, ideologically adrift Republican Party – a fact as frightening to many Republicans as it is disturbing to grassroots Democrats.

“The Republican Party’s entire modern identity is built on order, on always having an obvious designated leader,” said Democratic political consultant James Carville. “So this is unprecedented chaos for them.”

It is chaos that has been deftly exploited by Democratic strategists whose new ringleader is President Obama’s chief of staff, Rahm Emanuel.

Their antennae were first raised when Limbaugh – four days before Obama was even sworn in – told his listeners he “hopes” Obama fails.

With its partisan, naysaying flavor, it was a made-to-order slap at a White House that would soon score bipartisan points for at least trying (if not succeeding) to break the ideological gridlock in Washington, polls show.

The truth is that Limbaugh has spent two decades lobbing rhetorical hand grenades, many of them tinged with the kind of racist, sexist, homophobic code words that mostly delight his mostly white, male audience.

In his early, pre-syndicated days in Sacramento, Calif., Limbaugh was known for performing “caller abortions” – if he didn’t like what someone was saying, he’d cut them off to the sounds of a vacuum cleaner and a woman’s scream.

One of his 35 “Undeniable Truths” is that feminism was created “to allow unattractive women access to the mainstream,” and he once advised an African-American caller to “take the bone out of your nose and call me back.”

Last week, in a particularly odd tangent, he seemed to suggest that Emanuel, Carville and fellow Democratic consultant Paul Begala – all married men with children – were gay, “like a reunion of the Village People.”

But Limbaugh survives and thrives because unlike a conventional politician, he is accountable to no one other than his radio syndicators, who right now are paying him an industry record $400 million over eight years.

In 2006, after years of addiction to the pain killer Oxycontin, he was arrested for “doctor shopping” to get more pills. He pleaded not guilty but agreed to go through rehab if the charges were dismissed.

His personal life is equally messy. He’s been married three times and now lives with a woman 27 years his junior.

It’s an unlikely profile for the alleged leader of a party that considers “family values” and law and order to be central to their being.