The Non-Legislators in the Legislature

Democratic National Committee expresses frustration with the Republican Party’s empty rejections of President Obama’s plans. No is not enough in the business of solutions.
House Republican Leader John Boehner is fond of saying no. The New York Times reported today that Congressman Boehner and his colleagues refused to offer an alternative to the Obama team’s plans, specifically including President Obama’s budget. Rep. Boehner defended this position, stating that his party’s lawmakers are not obliged to offer any plans and that they “ought to get the idea out of their minds that they are legislators.” 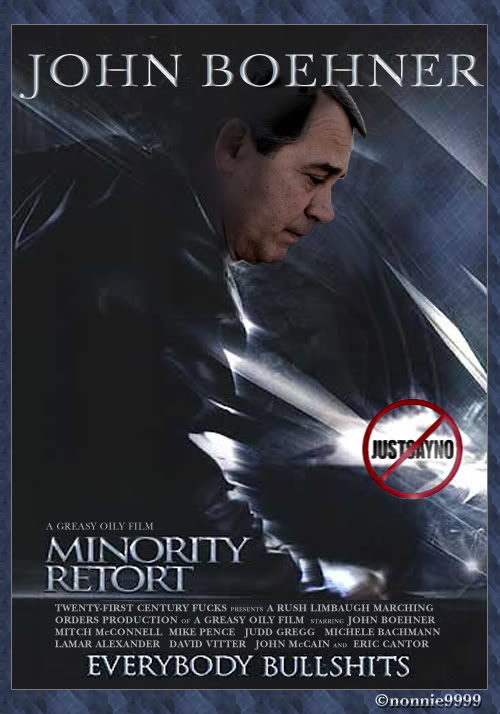 Democratic National Committee Communications Director Brad Woodhouse said, “John Boehner’s claim that his Party has no responsibility to legislate or offer any plans of their own – despite the economic crisis facing our country – are exactly the kind of typical Washington political games the American people rejected last November. The American people want leaders who will work together and bring practical ideas to the table. If we are going to confront the challenges we face, America cannot afford more of the same broken politics from the Rush Limbaugh-led obstructionist wing of the Republican Party. Instead of petty politics and empty obstructionism, Republicans in Congress should either support the President’s budget or present their own plan to create jobs, fix our schools, reform our health care system, and make America energy independent.”

WASHINGTON — Congressional Republicans are engaged in a highly coordinated political assault on President Obama’s budget, but they are not so united when it comes to offering an alternative to the spending plan they have been shredding as irresponsible.

Breaking with the House, Senate Republicans say they do not intend to offer a full counterproposal to Mr. Obama’s sweeping $3.6 trillion spending blueprint, a decision that will spare them from outlining potentially painful decisions required to bring federal books more in line with their call to hold down spending, cut taxes and reduce the deficit.

“The responsibility of the majority is to produce the budget,” said Senator Judd Gregg of New Hampshire, senior Republican on the Budget Committee, “and we think it is more constructive to point out how we would improve their budget.”

With a month to go before Congress is supposed to pass a budget resolution, Democrats say the absence of a competing Senate Republican plan makes Republican complaints about the Obama approach ring hollow.

“They are long on criticism and short on a plan,” said Rahm Emanuel, the White House chief of staff. “They have a communications strategy instead of an economic one.”

House Republicans said they intended to deliver a comprehensive alternative to the Obama plan to show how they would respond to the federal government’s deepening fiscal difficulties but were not ready to provide details.

As they try to reassert themselves as guardians of fiscal discipline after their own years of deficit spending, Republicans have been providing a steady stream of complaints depicting Mr. Obama’s plan as spending too much, taxing too much and borrowing too much.

The effort is being made with more than the usual level of cooperation between House and Senate Republicans, with Republican leaders of the two chambers appearing in tandem and lawmakers repeating their antibudget criticism almost as a mantra.

“Republicans in the House and Senate, with some degree of cooperation and collaboration, are going to attempt to both challenge the assumptions and the content of the president’s budget,” said Representative Mike Pence of Indiana, the No. 3 Republican in the House.

Some Republicans acknowledge that the constant repetition of their budget message could turn it stale in Washington, but they say such persistence is required to break through with the general public.

With their majorities in the House and Senate lost, Republican leaders say that an effective communications strategy is their best hope. They say they have little ability to influence the legislative debate, particularly in the House, if Democrats are determined to press ahead with Mr. Obama’s plan to take on health care, climate change, education, transportation and other major issues.

“As I told my colleagues, we don’t have enough votes to legislate,” said Representative John A. Boehner of Ohio, the Republican leader. “We are not in the majority. We are not kind-of in the minority; we are in a hole. They ought to get the idea out of their minds that they are legislators. But what they can be is communicators.”

Republicans are taking a political risk in offering such relentless resistance to Mr. Obama’s agenda, given his popularity and the gains Democrats made in Congress last year.

But they say they believe the public is becoming alarmed at the level of spending being pursued by Democrats. They intend to use the next month of budget debate to reinforce that impression.

52 responses to “The Non-Legislators in the Legislature”