It’s His Party, and He’ll Leave If He Wants To!

“This is not a national story,” McConnell said, playing down the party defection of Pennsylvania’s now-Democratic Sen. Arlen Specter. “This is a Pennsylvania story about his inability to be renominated by the Republican Party or be elected as an independent. He made a totally political decision.”

It’s a decision, however, that leaves the Senate with no GOP representation in the Northeast save for Judd Gregg of New Hampshire, who is retiring, and moderates Susan Collins and Olympia J. Snowe in Maine — both of whom joined with Specter in deserting their Republican colleagues to support President Obama’s economic stimulus package.

Jay Bybee has been a federal judge in the 9th U.S. Circuit Court of Appeals in  Las Vegas for 6 years.  He was little noticed until the release of a memo written by Bybee when he was head of the Justice Department’s Office of Legal Counsel.  The memo gave protection to what the Bush administration called harsh interrogation and what others call torture.  Liberal groups have called for Bybee’s impeachment.

The techniques excused by Bybee included waterboarding, sleep deprivation, beatings, and confinement in small boxes. In 2002, Bybee advised the Central Intelligence Agendy that they could use the tactics against Abu Zubaydah, a leader of al-Qaida.  Bybee said that the techniques were not torture, because there was “no intent to cause severe pain or suffering.”

When House Appropriations Committee chairman David Obey, the Wisconsin Democrat who has long championed investment in pandemic preparation, included roughly $900 million for that purpose in this year’s emergency stimulus bill, he was ridiculed by conservative operatives and congressional Republicans.

Obey and other advocates for the spending argued […that…] pandemic preparation was essential to any responsible plan for renewing the U.S. economy.

Now, as the World Health Organization says a deadly swine flu outbreak that apparently began in Mexico but has spread to the United States has the potential to develop into a pandemic, Obey’s attempt to secure the money seems eerily prescient.

I wish Deadeye Dick a room filled with ottomans

Richard Armitage, who was second in command at the State Department during former President George W. Bush’s first term, believes waterboarding is torture and says he would have resigned had he known the CIA was torturing suspects.

The statement makes him one of the highest ranking former Bush administration officials to label the former president’s policy torture.

In an interview with MSNBC’s Norah O’Donnell, Liz Cheney, a former Deputy Assistant Secretary of State during the Bush administration, defended her father, saying that the harsh interrogation tactics yielded valuable intelligence and that the tactics didn’t amount to torture.

Cheney added that the tactics outlined in the CIA memos are the same techniques are used on Americans for training purposes. “Everything that was done in this program, as has been laid out and described before, are tactics that our own people go through in SERE (Survival, Evasion, Resistance and Evasion) training,” she said adding, “We did not torture our own people.”

Rotten to the Core

Today we’re releasing the declassified report of the Senate Armed Services Committee’s investigation into the treatment of detainees in U.S. custody. […] In my judgment, the report represents a condemnation of both the Bush administration’s interrogation policies and of senior administration officials who attempted to shift the blame for abuse – such as that seen at Abu Ghraib, Guantanamo Bay, and Afghanistan – to low ranking soldiers. Claims, such as that made by former Deputy Secretary of Defense Paul Wolfowitz that detainee abuses could be chalked up to the unauthorized acts of a “few bad apples,” were simply false.

Join the Rethuglican Party, and Get a Free Set of Kneepads!

From Political Animal at Washington Monthly:

AND THEN THERE WERE FIVE…. Last week, Rep. Todd Tiahrt (R) of Kansas was asked whether Rush Limbaugh was the “de facto leader of the GOP.” Tiahrt rejected the idea out of hand, telling the Kansas City Star, “No, no, he’s just an entertainer.”

This is, of course, the one line elected Republican officials are not supposed to cross. Limbaugh is to be revered, not dismissed. 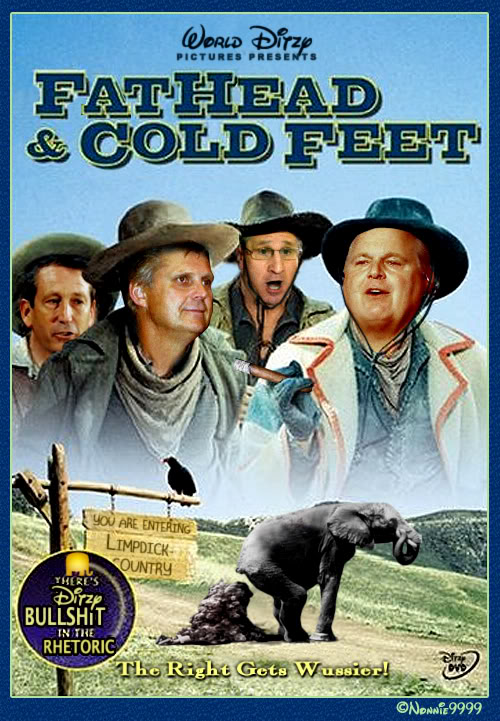 Should Rudy oppose gay marriage when he’s running out of women to marry?