Too much coffee makes your eyes squint

It’s blissful that the worst thing that’s happened to me on recent shifts is getting home just in time to miss “The Daily Show,” and having to wait for reruns on the latest tit-for-tat.

In one corner is “Daily Show” host Jon Stewart, who mocked MSNBC’s “Morning Joe” news program for its uncomfortable tie-ins to the Starbucks coffee franchise. They landed the first show, with video edited together of in-show praising of Starbucks beverages.

Scarborough punched back a few days later, of course, saying the product placement was “sarcasm” and intimated Stewart and his writing staff were too dumb to pick it up.

So I guess that means Scarborough sarcastically drank coffee. I should have also picked up that he sarcastically interviewed Starbucks CEO Howard Schultz by not asking about the company’s financial troubles. And for the next few years, parent company GE will sarcastically cash $10 million in endorsement checks.

In Scarborough’s honor, I think I’ll go to a restaurant I don’t really like, eat their food and pay my bill — but I’ll later say I chewed sarcastically. Stewart wins in a knockout.

Here’s a great media feud for your Wednesday in June! In one corner, MSNBC’s Starbucks-sponsored glee club, Morning Joe, and in the other corner, place-where-the-kids-get-their-news-these-days The Daily Show. See, it goes like this: Jon Stewart, as is his wont, made fun of the recent Morning Joe/Starbucks co-branding. And then Joe Scarborough got mad, because obviously their big show of Starbucks-loving was an over-the-top joke, of epic Del Closian dimensions, and surely there was someone at The Daily Show who could discern this. But Stewart and his writers chose to make sarcastic fun of Morning Joe again. It’s almost as if the lesson here is that maybe if you go out of your way to set up jokes for professional comedy writers, they will hand you your ass, with humor!

Anyway, Joe Scarborough was on the air today “speaking out” on this again, because he’s angry at Jon Stewart.

Joe Scarborough [called] Jon Stewart a “very, very, angry guy” with a “Napoleonic complex.” Because he’s short! Like Napoleon! The joke just works on so many levels. Truly, this is an evenly matched battle of wits.

(HuffPo has the video at the above link.)

I don’t usually watch Morning Joe. However, I did catch it once or twice, and I can’t understand what Jon Stewart’s beef is… 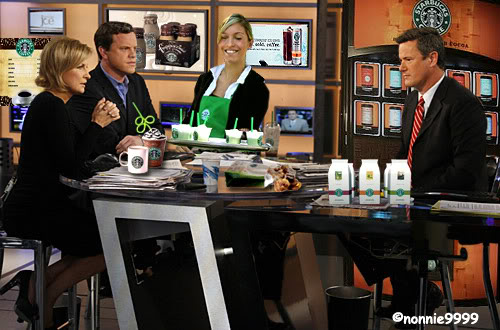 21 responses to “Too much coffee makes your eyes squint”