Another week, another sex scandal: Word broke late yesterday that former GOP Rep. Chip Pickering is the latest politico in trouble for allegedly cheating on his wife. Pickering’s now-estranged wife, Leisha, has filed suit against his alleged mistress, whom she says busted up their marriage and ruined her husband’s political career. […] What’s so juicy about this latest dust-up? Well, while he was in Congress, Pickering just so happened to bunk at the increasingly infamous rowhouse at 133 C Street SE here in Washington, a “Christian fellowship home” where he was roomies with John Ensign and where Mark Sanford used to hang out. 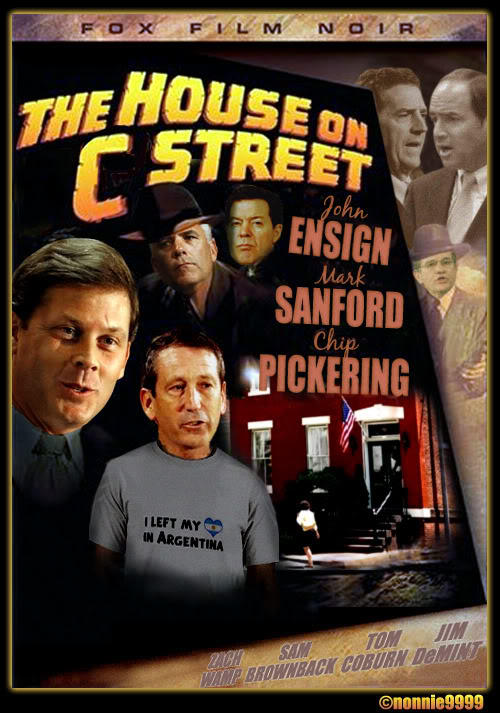 Ensign and Sanford, as the world well knows, have been caught up in their own sex scandals in recent weeks. C Street is even mentioned in Leisha Pickering’s lawsuit: She says her husband and [his mistress, Elizabeth] Creekmore Byrd snuck around there. Scandal!

So what exactly is going on at this house on C Street? The Washington Post had a good profile a few weeks ago about the increasingly curious rowhouse, which is owned by a secretive religious group that encourages lawmakers to promote Christian ideals in public policy. At least five GOP members of Congress currently rent rooms there, including Ensign.

No doubt Pickering’s problems will turn up the focus on other residents in the house. According to the Post, that includes Reps. Mike Doyle, Bart Stupak and Zach Wamp—none of whom will comment on what’s been happening at C Street. Privately, they are said to be worried about being tarred by the various scandals.

As the Republican Party implodes the public is becoming aware of a secretive Christian society known as the Family or the Fellowship. The group was founded in 1935 in opposition to FDR’s New Deal and its adherents subscribe to a far right Christian fundamentalist and free market ideology. A minister named Abraham Vereide founded the Family after having a vision in which God visited him in the person of the head of the United States Steel Corporation (no, I’m not making this up). The Family has a connection to house on C Street in Washington, D.C., known simply as C Street. Officially registered as a church, the building serves as a meeting place and residence for conservative politicians.

Few members of the fellowship talk about the group’s mission. The organization organizes the annual National Prayer Breakfast which is attended by the president, members of Congress, and diplomats from around the world.

When they’re not philandering and violating their own professed Christian morality, C Street members push for the projection of U.S. power abroad. As Obama went to Port of Spain, Trinidad for the Summit of the Americas in April it was Ensign who criticized the President for shaking Hugo Chávez’s hand. […] Ensign, a big booster of corporate-style free trade, voted for the Central American Free Trade Agreement or CAFTA in 2005. He also supports the coup government in Honduras and signed a letter to Secretary of State Clinton calling on the Obama administration to revoke its support for deposed Honduran President Manuel Zelaya.

Coburn, who is an obstetrician, has advocated the death penalty for any of his peers who carry out abortions. In the foreign policy realm he has stuck to a moralistic credo. He criticized a USAID program for example which sought to teach commercial sex workers in Central America about condom use to prevent HIV AIDS.

C Street’s real free trade messiah is South Carolina native son Jim DeMint who just chastised the White House for supporting Zelaya, thereby carrying out what he called “a slap in the face to the people” of Honduras. […] It’s hardly surprising that Demint would come out for the military takeover in Honduras given that he’s been a long time booster of Central American free trade. […] First elected to the House in 1998, he has been an eager promoter of far right wing economic orthodoxy like privatizing social security and abolishing the federal minimum wage.

Zach Wamp is another free trade zealot at C Street. Like his fellow Christian members, he supported CAFTA.

Wamp has also signed on as a co-sponsor to legislation which condemns former Honduran President Manuel Zelaya for carrying out unconstitutional moves.

In their own personal lives, C Street members have made a mockery of the group’s Christian teachings. Yet when it comes to the far more important and consequential issue of foreign policy these Republicans have stuck to their guns. From Chávez to Zelaya to free trade in Central America they have been consistent in seeking to overturn progressive reform and working to maintain U.S. imperial hegemony.