From the LAS VEGAS SUN:

WASHINGTON — Republican Sen. John Ensign’s top staff at the National Republican Senatorial Committee knew about the senator’s affair during the height of the 2008 election season last summer before the party’s devastating losses that bolstered Democratic control of the Senate, according to e-mails obtained by a Las Vegas Sun columnist. 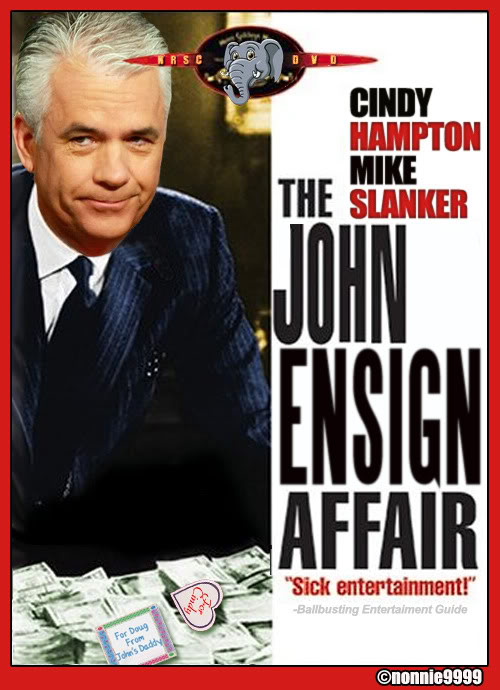 The Sun’s Jon Ralston is also reporting this afternoon that the woman’s husband sought help from former Republican Sen. Rick Santorum, further questioning if Santorum tipped off Ensign that the husband was going public with the affair.

(You can read e-mail from Doug Hampton to Rick Man-on-Dog Santorum at bolded link–warning, PDF files)

Ralston reports that Mike and Lindsey Slanker, the husband-and-wife team that helped run the national committee when Ensign was its chairman last year, struggled as they dealt with fallout from the senator’s affair.

Ensign admitted an affair with Cynthia Hampton, his former campaign treasurer, whose husband, Doug Hampton, had been one of the senator’s top aides at the time.

Ensign later helped Doug Hampton get a job with November Inc., the Nevada-based political consulting firm run by the Slankers.

In one e-mail exchange dated July 10, 2008 between Mike Slanker and Doug Hampton obtained by Ralston shows that Slanker would have been aware of the affair.

Another e-mail that day from Lindsey Slanker to Cynthia Hampton further discusses the difficulty the situation has had on their friendship.

Mike Slanker had previously told the Associated Press he was unaware of the affair.

Ensign’s Republican colleagues in the Senate essentially gave him a pass after losing eight seats during the 2008 election and putting Democrats within sight of a filibuster-proof majority, chalking it up to a difficult year for the Republican Party.

Ensign went on to be elected by his peers to party leadership last fall, but stepped down from the No. 4 position earlier this year after announcing his affair.

Ralston also reports that Doug Hampton’s e-mail to Santorum is dated June 15, the day before Ensign abruptly left Washington to return to Las Vegas to announce the affair.

Ensign’s office has said the senator decided to go public because the husband was taking the affair to the media.

Santorum has declined to address the situation when asked recently by Politico.