Well, kids, last night my internets connection crapped out, and I couldn’t do a lot of research. I did, however, watch The Colbert Report, and I heard a story about a company that offers celebrity look-alike sperm.

Washington, DC (LifeNews.com) — Anyone who has ever wondered what it would be like to have a baby whose genes come from someone who looks like a celebrity can now have their wish fulfilled. That’s thanks to a company that is coming under fire for offering sperm from people who may resemble your favorite celebrity.

The firm, which will soon open an office in New York, allows customers to search through a database according to characteristics such as ethnicity and eye color without revealing donors’ photographs.

Scott Browne, a spokesman for Cryobank, told BioNews, “The intention is not to suggest the child will look like one of the celebrities. It’s just to personalize the donor.”

That got me wondering what some famous people looked like when they were babies and whether people would really want their offspring to look like them, so when my crappy Comcast internets connection fired back up, I did some digging and found a few baby pictures of people you might know. First, here’s Rush Limpdick Limbaugh being held by his father:

You know how you can look at some baby pictures and know exactly who the person is? This is one of those times:

You can’t see much of his face, but the personality of Glenn Blechhhh Beck shines through!

Here’s Princess Sarah Palin before she quit being an infant: 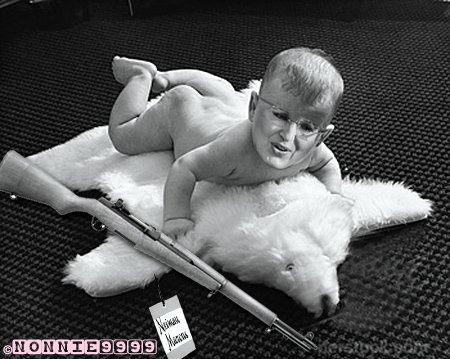 Even back then, things were either black or white in Princess Sarah’s world.

Here’s Little Lindseypoo Graham with his Captain Underpants doll. This explains so much:

Any baby pics you’d like me to ferret out, kids? Let me know in the comments.