The governor’s annual deer-and-publicity-hunting excursion over the weekend seems to have turned into a bit of a PR nightmare.

Shhhh! Be vewwy, vewwy quiet! Here’s a pic of Governor Timmy heading out for the hunt. 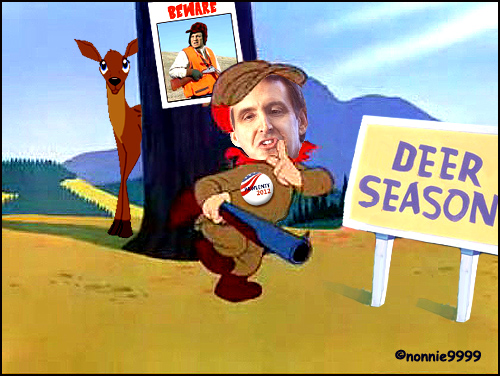 It turns out that, unlike most years, the governor actually shot a deer this time, according to the Star Tribune. The bad news is that he didn’t kill it, and the seriously wounded buck bounded off into the forest.

This was the scene right before the horror began: 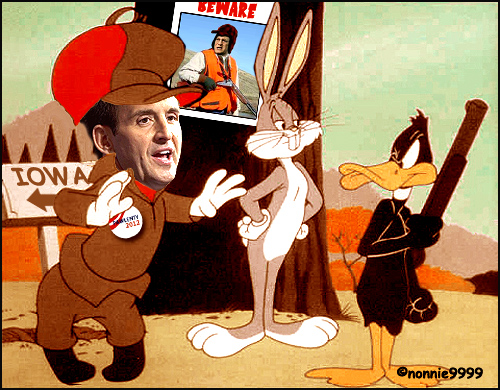 But rather than help look for the suffering animal, which is every hunter’s ethical responsibility, Pawlenty delegated the job to others because he had to fly off to a Republican Party fundraiser in Iowa.

Despite a two-day search by the hunting party, the deer was never found. “It was extremely frustrating,” the landowner Warren Sparby was quoted as saying. “We do know he shot it, because it was bleeding profusely. We combed and combed and combed, but still couldn’t find it. … We gave it the best shot we could.”

Forest denizens were furious at the governor, and they wrested the rifle right out of his hands!

When Gov. Tim Pawlenty lost track of that buck he shot last week, and left it to his hunting buddies to track it down while he flew off for a political speech in Iowa, we began to ponder the degree to which the wounded creature might come back to bite him in the political butt.

With that in mind we bring you this gem of a post from a site called DeerHuntingChat.com:

What kind of slob hunter goes out opening morning and shoots a deer knowing full well you won’t have time to retrieve it or tend to it? One whose presidential ambitions override his hunting ethics, that’s what kind. I hope all you hunters out there remember this sorry episode when Tim Pawlenty comes looking for your support in 2012. Minnesota doesn’t need any more slob hunters like Pawlenty, and we certainly don’t need one in the White House.

This is probably not what the Minnesota Deer Hunters Association, Explore Minnesota Tourism and the Minnesota DNR had in mind when they sponsored the annual Governor’s Deer Hunting Opener on Wally Sparby’s land near Thief River Falls.

If they only knew how ugly the aftermath really was! 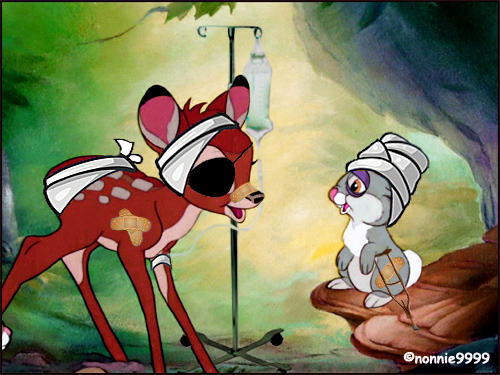