Why is Popeye on the Google home-page today?

I was wondering, too.

Popeye the Sailor Man, his bulging forearms, and his strength-fortifying can of spinach can be seen on Google’s home page today, doing fans of cartoon art a big favor. Today is the birthday of Popeye creator E.C. Segar, born 115 years ago.

Segar was a newspaper cartoonist, and Popeye was first seen in Segar’s comic strip “Thimble Theater,” starring the sailor, his rail-thin girlfriend Olive Oyl, her brother Castor Oyl, and, eventually, their hamburger-munching pal Wimpy, and Popeye’s rival for Olive, the hulking Bluto.

Oh, okay. Well, kids, this brought to mind a diary I published over at American Street back on February 13, 2008. I thought I’d dust it off for our very own tribute to the Sailor Man. Happy birthday, E.C. Segar, wherever you are. Here’s the diary:

Hi kids! As election fever takes over every conversation, every bullshit-laden package of talking heads trying to sound intelligent news show, and every blog, I thought we should take a minute and remember what we will thankfully be leaving behind. First, though, a tip of the hat

to the lovely and talented Friend of the Court for suggesting the theme for this crappy diary humble submission.
Now back to business. We all know that this horrendous era will forever be known as the Chimpy Bush Administration, after this guy….

…but we all know who has the real power and is calling all the shots. It’s this guy…

He looks mean, doesn’t he? Anyway, they got into power reportedly due to the strategery of this guy….

He now works for Faux Fox News Channel, where they will gladly give you news today and give you proof never.
There are others who contributed to the huge clusterf*uck have major roles in the Chimpy Bush Administration, such as Condoleezza Rice, the Secretary of State…

…and John Bolton, who is batshit crazy!! No, really!!! used to be the U.S. Ambassador to the United Nations…

Well, kids, the clock is ticking on this bunch, and the torch must be passed. I guess it is only natural that this administration and the Republican Party would put its money on the person they think will carry on the clusterf*uck their policies. In fact, it is sort of difficult to tell apart the old from the new! Well, the new old…or is he the old new?

We dodged that bullet, thank goodness. And remember, kids, that was before we even knew about the nightmare that was to come… 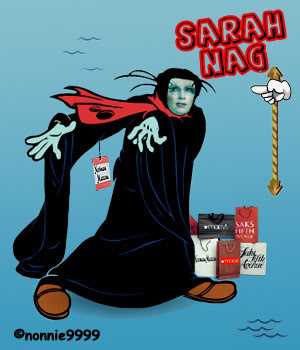 (All original images can be found here)

11 responses to “No Spin-ach Zone”