When does the Lifetime movie come out?

COLUMBIA, S.C. (CN) – South Carolina First Lady Jenny Sanford has filed for divorce, 7 months after her husband confessed to an affair with an Argentine mistress, and just days after a state House judiciary panel voted to censure, but not impeach, her husband, Gov. Mark Sanford.

Mrs. Sanford said in a statement, “As so many of us know, the dissolution of any marriage is a sad and painful process. Because Mark and I are public figures, we have naturally had less privacy with which to deal with our difficulties than do other couples. Indeed, I know it will soon become known, so I choose to release this brief notice that I am now filing for divorce.”

Poor Jenny, I bet she loves her privacy, especially when it comes to really personal things like this. And I bet she’ll tell us all about it in that book she’s writing about her husband’s affair. 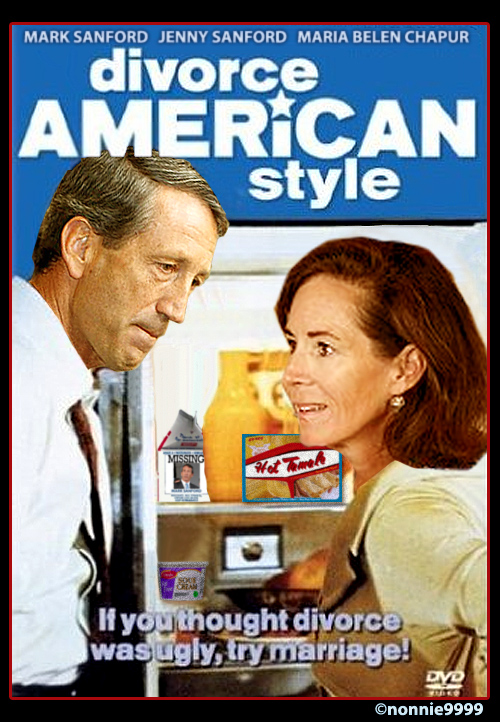 Looks like Sparky Marky Mark hasn’t cleaned out the fridge in quite a while.

The Sanfords have been separated since shortly after the governor’s 5-day disappearance in June for what turned out to be a rendezvous with the woman identified as his mistress, Maria [Belen] Chapur.

Sanford confessed to the affair upon his return from South America, then appeared to compound his problems at home by continually talking about it, at one point describing Chapur as his “soul mate.”

Since then, Ms. Sanford has been living at the family’s beach house on Sullivan’s Island, S.C., with her four sons, while the governor stayed in Columbia. All the while both maintained publicly that they wanted to salvage their marriage.

Gov. Sanford said as much to reporters on Thursday.

But Mrs. Sanford said her decision to file for divorce came “after many unsuccessful efforts at reconciliation.”

In his own statement, Gov. Sanford described the first lady as a great person and a remarkable wife and mother.

21 responses to “When does the Lifetime movie come out?”