Batshit Bachmann Has a Farm, E-I-E-I-Uh-Oh!

From Yasha Levine at truthdig:

Michele Bachmann has become well known for her anti-government tea-bagger antics, protesting health care reform and every other government “handout” as socialism. What her followers probably don’t know is that Rep. Bachmann is, to use that anti-government slur, something of a welfare queen. That’s right, the anti-government insurrectionist has taken more than a quarter-million dollars in government handouts thanks to corrupt farming subsidies she has been collecting for at least a decade.

And she’s not the only one who has been padding her bank account with taxpayer money. 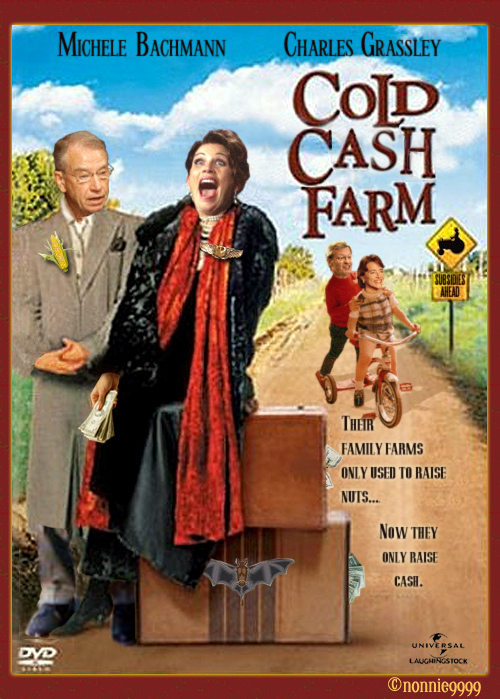 Bachmann, of Minnesota, has spent much of this year agitating against health care reform, whipping up the so-called tea-baggers with stories of death panels and rationed health care. She has called for a revolution against what she sees as Barack Obama’s attempted socialist takeover of America, saying presidential policy is “reaching down the throat and ripping the guts out of freedom.”

But data compiled from federal records by Environmental Working Group, a nonprofit watchdog that tracks the recipients of agricultural subsidies in the United States, shows that Bachmann has an inner Marxist that is perfectly at ease with profiting from taxpayer largesse. According to the organization’s records, Bachmann’s family farm received $251,973 in federal subsidies between 1995 and 2006.

However, Bachmann doesn’t think other Americans should benefit from such protection and assistance. She voted against every foreclosure relief bill aimed at helping average homeowners (despite the fact that her district had the highest foreclosure rate in Minnesota), saying that bailing out homeowners would be “rewarding the irresponsible while punishing those who have been playing by the rules.” That’s right, the subsidy queen wants the rest of us to be responsible.

Bachmann’s financial disclosure forms indicate that her personal stake in the family farm is worth up to $250,000. They also show that she has been earning income from the farm business, and that the income grew in just a few years from $2,000 to as much as $50,000 for 2008.

But Bachmann isn’t the only welfare recipient on Capitol Hill. As it turns out, there is a filthy-rich class of absentee farmers—both in and out of Congress—who demand free-market rules by day and collect their government welfare checks in the mail at night, payments that subsidize businesses that otherwise would fail.

Chuck Grassley, the longtime Republican senator from Iowa who warns his constituents of Obama’s “trend toward socialism,” has seen his family collect $1 million in federal handouts over an 11-year period, with Grassley’s son receiving $699,248 and the senator himself pocketing $238,974. Even Grassley’s grandson is learning to ride through life on training wheels, snagging $5,964 in 2005 and $2,363 in 2006. In the Grassley family they learn early how to enjoy other people’s money.

Sen. Grassley railed against government intervention in the health care market, telling The Washington Times, “Whenever the government does more … that’s a movement toward socialism.” As the top Republican on the Senate Finance Committee, he ought to know, especially because the government has done more for him and his kin than for Americans struggling with high medical bills and mortgages.

Then there’s Sen. Sam Brownback, R-Kan., whose family has been on the government take for at least the past 11 years, pocketing some $500,000. The senator recently held a “prayercast” with Michele Bachmann to beseech God to kill health care reform as soon as possible because it would bring an evil socialist spirit into America. Like Bachmann, Brownback has a fierce belief in God, the free market and a two-year limit on all welfare benefits—unless it’s welfare to rich Republicans who don’t need it.

Not surprisingly, Blue Dog Democrats are on board with this welfare-for-the-rich thing. Max Baucus, the fiscally conservative Democratic senator from Montana who did his best to sabotage the health care reform process before it ever began, collected $250,000 in taxpayer subsidies to his family’s farm while fighting to keep Americans at the mercy of free-market health insurance. Sen. Blanche Lincoln of Arkansas, another Democrat, also helped hold the line against so-called socialized medicine for Americans who need assistance, even though her family farm business follows the socialized subsidy playbook to a T. The Lincolns pocketed $715,000 in farm subsidies over a 10-year period, and the senator even admitted to using $10,000 of it as petty cash in 2007. Democratic Rep. Stephanie Sandlin of South Dakota stayed true to her conservative free-market roots by voting against the public option. Meanwhile, her daddy, Lars Herseth, a former South Dakota legislator, collected a welfare jackpot of $844,725 paid out between 1995 and 2006.

Farm subsidies have become so corrupt that payments sometimes go to dead people for years. Federal farm subsidies, which were originally meant to help struggling farmers survive, are now little more than taxpayer robbery, taking taxpayer wealth from working Americans and sending it to the have-mores. According to 11 years’ worth of Environmental Working Group data that tracks $200 billion in subsidies, the wealthiest 10 percent of “farmers” have collected 75 percent of the money. That’s exactly the kind of socialism that Rep. Bachmann and her elite ilk like.