That’s the Way the Cokie Grumbles

From Steve and Cokie Roberts at The Mercury:

Steve recently took part in a lunchtime panel sponsored by a local radio station. A beefy young man in the audience grabbed the microphone and challenged the speakers, in a sneering and confrontational tone, to name one good thing about President Obama’s healthcare proposal.

Steve’s answer: People without insurance flood hospital emergency rooms and push up medical bills for everyone. So it would be in the “national interest” to expand insurance and hold down costs. “The national interest?” retorted the questioner in an even louder voice. “That sounds like fascism!”

We don’t know what the beefy guy reads or to whom he listens, but we would bet he’s a disciple of Glenn Beck. The popular author and broadcaster who has turned nonstop name-calling into an art form is a big fan of the “f-word.” 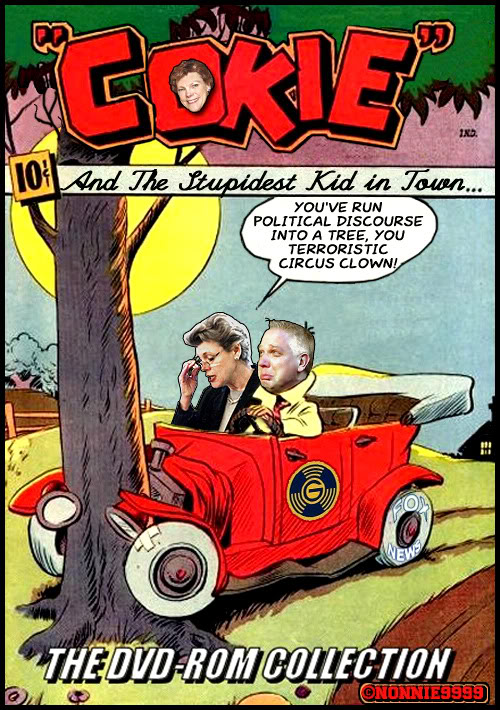 On a recent show, Beck went after Christian churches that preach “social justice” (which includes just about all of them). “I beg you,” he told his followers, “look for the words ‘social justice’ and ‘economic justice’ on your church Web site. If you find it, run as fast as you can. Social justice and economic justice, they are code words.”

Beck has made millions spewing such incendiary language, but in the process he is corrupting the very essence of democracy.

But if you think your rivals are “fascists,” if you consider politics a form of holy war, then you place yourself outside basic American traditions. Moreover, you tell your followers that verbal car bombs are an appropriate form of political discourse (which is why we think that guy had to be a resident of Glennbeckistan).

Beck is clearly a growth industry: a daily show on Fox News, a slew of best-selling books, a national speaking tour, headliner slots at conservative rallies and fundraisers. But even his friends are starting to get uneasy, and they should.

After Beck denounced Obama last year as a “racist” with “a deep-seated hatred for white people or the white culture,” major advertisers quit supporting him. After Beck derided the Republican Party at a meeting of Tea Party activists, conservative talk-show host Mark Levin urged Beck “to stop acting like a clown” and added, “Decide what you are, a circus clown, self-identified, or a thoughtful and wise person. It’s hard to be both.”

Executives at Fox News, where Beck’s 5 p.m. show is a huge hit, back their star in public, but Howard Kurtz reports in the Washington Post that there is a “deep split within Fox” over his impact on the network’s reputation.

We defended Fox News when the White House attacked the network last year, partly because it employs many fine journalists, including several of Steve’s former students. But news folks at Fox are right to be worried. At some point, Beck’s fanaticism taints them all.

“They’re right on the cusp of losing their image as a news organization,” says Andrew Tyndall, a respected television analyst.

We are not denying Glenn Beck or anyone else their First Amendment rights. He can say anything he wants. But advertisers don’t have to support his brand of hate mongering, and audiences don’t have to take Fox News seriously if one of its top names has turned himself into a “circus clown.”

Actually, Beck is worse than a clown. He’s more like a terrorist who believes he has discovered the One True Faith, and condemns everyone else as a heretic. And that makes him something else as well — a traitor to the American values he professes so loudly to defend.

21 responses to “That’s the Way the Cokie Grumbles”