CPT:2010 The Brain That Wouldn’t Work

Sharron Angle has resorted to an unusual maneuver to counter Senate Majority Leader Harry Reid’s attacks on her past quotes and positions, the Reid campaign has announced: A cease-and-desist letter, demanding that Reid no longer republish Angle’s previous campaign website. 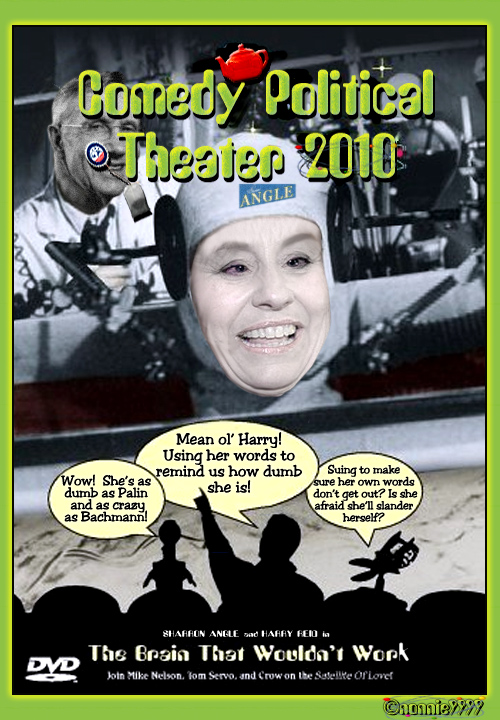 The short version of the story is as follows: After the former state Rep won Nevada’s Republican Senate primary, Angle’s campaign took down most of its website, and later replaced it with a relaunched version that in some ways toned down her right-wing rhetoric. But Internet pages are rarely ever forgotten — the Reid campaign saved the old version, and put up a website called “The Real Sharron Angle,” reproducing the old content.

Then, they say, the Angle campaign sent them a cease-and-desist letter, claiming misuse of copyrighted materials in the reposting of the old website — which was, of course, being posted for the purposes of ridiculing Angle. The Reid campaign has in fact taken down the site, rerouting visitors to another website that goes after Angle’s positions, “Sharron’s Underground Bunker.”

The Reid campaign said in a press release:

“Sharron has long believed in killing Social Security, eliminating the Departments of Education and Energy and shipping nuclear waste to Nevada. We’ve always heard that Sharron Angle is an unapologetic conservative. It has to be embarrassing for her to have her handlers trying to hide who she really is.”

We asked Reid campaign deputy communications director Zac Petkanas whether, by taking down the “Real Sharron Angle” site, they were admitting the legitimacy of the complaint. “While we do not necessarily agree with the Angle campaign’s assertions, a point is made,” said Petkanas. “Sharron Angle is hiding her views from Nevada voters.”

The Angle campaign has not returned our request for comment.

You can read the cease-and-desist letter is here. The most stunning thing to me is that she didn’t retain Orly Taitz as her attorney.

Harry Reid isn’t letting threats of a lawsuit stop him — he’ sticking with his Web campaign against “the real Sharron Angle.” After the Angle campaign sent the Reid camp a cease-and-desist letter last week demanding that they take down their reposting of Angle’s old campaign website, the Reid camp has now made just a few modifications and put it right back up.

The Angle campaign […] claimed that by leaving fill-in boxes for e-mail addresses intact, the Reid campaign was in a position to gain contact information of Angle’s supporters who were deceived into thinking this was actually her site. Angle spokesman Jerry Stacy said in a press release: “Make no mistake, the Reid campaign was forced to take this site down because they were breaking several laws and trying to deceive the voters.”

The Reid campaign did initially take down the site, seemingly obeying the cease-and-desist, and rerouted users to one of their other anti-Angle sites. But now they’re put it right back up, simply removing the sign-up fields, some formatting and other identifying marks. From the Reid campaign’s press release:

Out of an abundance of caution, the Reid campaign decided to temporarily remove the website in question while we investigated their allegations. Well, the phony legal threats and the feigned indignation are over – and we’re not going to let Sharron Angle retroactively censor Sharron Angle. The original website, including Angle in her own words on her dangerous and extreme agenda, has been re-launched at: http://www.TheRealSharronAngle.com.

Just to be clear to Sharron Angle and her handlers, it’s called free speech and it’s nearly absolute under the First Amendment. (We know, these “big Constitutional issues” are tough for you – like when you said separation of Church & State was “unconstitutional” exactly one week ago.)

“The question is: what will Sharron Angle do now to hide her extreme views on killing Social Security and eliminating the Department of Education from Nevada voters? Perhaps she’s checking to see if there are any Second Amendment remedies,” said Jon Summers, spokesman for the Reid campaign.