The Grapes are Sour in Floriduhhh, Must Be the Heat

Two days after he lost the Republican nomination for governor, McCollum still refuses to support winner Rick Scott, and continues to raise questions about his former rival’s character.

In his first public appearance since conceding the race, McCollum said Thursday that he called Scott to “congratulate him and wish him well.” But he didn’t bury the hatchet in one of the nastiest primary’s in state history. 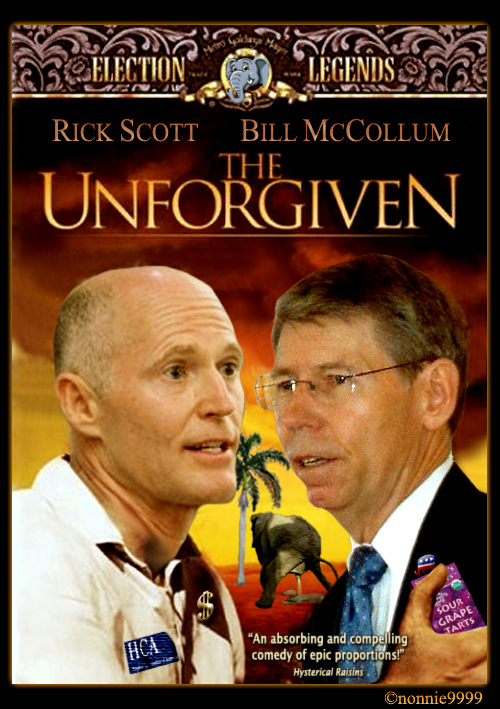 “I still have serious questions about issues of his character, his integrity, his honestly — things that go back to Columbia/HCA,” McCollum said, referring to Scott’s former hospital chain, which paid a $1.7 billion fine after a federal criminal investigation. “As other voters will do, I will judge him throughout this campaign.”

The attorney general’s remarks put a serious dent in the message of party unity and reopened a vulnerability Democratic candidate Alex Sink is likely to exploit in the general election.

Unlike McCollum, other top Republicans are willing to move on. Florida GOP Chairman John Thrasher met with Scott for nearly two hours on Thursday at his campaign headquarters in Fort Lauderdale.

Scott said he would raise money for the GOP ticket in the general election, and his staff will help direct campaign efforts at party headquarters in Tallahassee.

But McCollum isn’t willing to rinse his distaste so quickly.

The last time he lost a bruising campaign — the 2004 U.S. Senate Republican primary against Mel Martinez — it took McCollum two weeks before he tepidly endorsed his opponent. And it came only after Martinez apologized.

“It is unfortunate for Bill McCollum that he has chosen to be a sore loser just as he was following his defeat to Sen. Martinez in 2004,” said Scott spokeswoman Jennifer Baker.

McCollum broadcast his fair share of attacks against Scott. But he also relied on traditional media coverage and newspaper endorsements, as well as the support from big-name Republicans like Mike Huckabee and Jeb Bush, to spread his message.

McCollum said he is now focused on his final four months as the state’s top legal officer and pressing the lawsuit against the federal government concerning the healthcare law.

And once he leaves office, he said, he plans to stay involved in defining the state’s future.

“Will I continue to take part in it? Of course I will,” he said. “Maybe not in elective office. But I’m not going to sit on the sidelines, as some people have done, and just sort of walk away.”

Yeah, because his convictions are as strong as his jawline. 🙄

17 responses to “The Grapes are Sour in Floriduhhh, Must Be the Heat”