Unless you’ve been living under a rock, you’ve undoubtedly heard that Chimpy’s 2004 campaign manager and former Republican National Committee chairman, Ken Mehlman, finally admitted what everyone already knew–he’s gay. The media was all abuzz. Here are some of what the luminaries at Fox News had to say:

When Judge Vaughn Walker struck down Proposition 8, Fox News barely mentioned the story and its most prominent conservative commentators ignored it entirely.  Yesterday, after the Atlantic’s Marc Ambinder reported that former RNC Chairman Ken Mehlman — who had orchestrated President Bush’s gay-bating 2004 re-election campaign — was coming out as gay, Fox News Channel remained similarly mum and as of this posting has yet to run a single segment on the story. 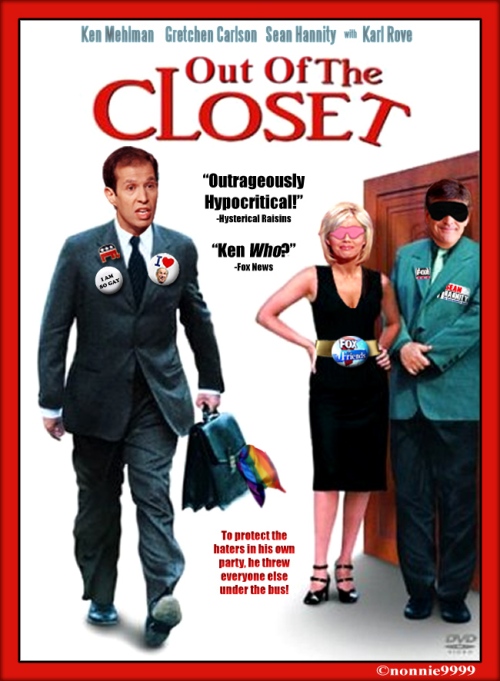 It’s unclear why Fox News ignored the story, since some Republicans have embraced Mehlman’s coming out. Current Republican Party chairman, Michael Steele, for instance, issued a supportive statement […]. Mehlman has also said that President Bush has been “incredibly supportive” of his coming out.

Ignoring stories which undermine conservative causes, however, is the norm at Fox. Earlier this month, Fox News refused to run a single segment on Dr. Laura Schlessinger’s racially-charged rant, after which she resigned from talk radio.

From Marc Ambinder at The Atlantic:

Ken Mehlman, President Bush’s campaign manager in 2004 and a former chairman of the Republican National Committee, has told family and associates that he is gay.

Mehlman arrived at this conclusion about his identity fairly recently, he said in an interview. He agreed to answer a reporter’s questions, he said, because, now in private life, he wants to become an advocate for gay marriage and anticipated that questions would arise about his participation in a late-September fundraiser for the American Foundation for Equal Rights (AFER), the group that supported the legal challenge to California’s ballot initiative against gay marriage, Proposition 8.

Privately, in off-the-record conversations with this reporter over the years, Mehlman voiced support for civil unions and told of how, in private discussions with senior Republican officials, he beat back efforts to attack same-sex marriage. He insisted, too, that President Bush “was no homophobe.” He often wondered why gay voters never formed common cause with Republican opponents of Islamic jihad, which he called “the greatest anti-gay force in the world right now.”

Mehlman’s leadership positions in the GOP came at a time when the party was stepping up its anti-gay activities — such as the distribution in West Virginia in 2006 of literature linking homosexuality to atheism, or the less-than-subtle, coded language in the party’s platform (“Attempts to redefine marriage in a single state or city could have serious consequences throughout the country…”). Mehlman said at the time that he could not, as an individual Republican, go against the party consensus. He was aware that Karl Rove, President Bush’s chief strategic adviser, had been working with Republicans to make sure that anti-gay initiatives and referenda would appear on November ballots in 2004 and 2006 to help Republicans.

Mehlman acknowledges that if he had publicly declared his sexuality sooner, he might have played a role in keeping the party from pushing an anti-gay agenda.

He said that he “really wished” he had come to terms with his sexual orientation earlier, “so I could have worked against [the Federal Marriage Amendment]” and “reached out to the gay community in the way I reached out to African Americans.”

Mehlman, who has never married, long found his sexuality subject to rumor and innuendo. He was the subject of an outing campaign by gay rights activist Mike Rogers, starting when Mehlman was Bush’s campaign manager.

Mehlman is the most powerful Republican in history to identify as gay.

Because his tenure as RNC chairman and his time at the center of the Bush political machine coincided with the Republican Party’s attempts to exploit anti-gay prejudices and cement the allegiance of social conservatives, his declaration to the world is at once a personal act and an act of political speech.

During the Rogers crusades, many news organizations made attempts to confirm rumors and stories about Mehlman’s sexuality. Republicans close to Mehlman either said they did not know, or that it did not matter, or that the question was offensive.

Mehlman once joked in public that although he was not gay, the rumors put a crimp on his social life. He admits to having misled several people who asked him directly.

He said that he plans to be an advocate for gay rights within the GOP, that he remains proud to be a Republican, and that his political identity is not defined by any one issue.

Ed Gillespie, a former RNC chairman and long-time friend of Mehlman, said that “it is significant that a former chairman of the Republiucan National Committe is openly gay and that he is supportive of gay marriage.” Although Gillespie himself opposes gay marriage, he pointed to party stalwarts like former Vice President Dick Cheney and strategist Mary Matalin as open advocates for gay rights who had not been drummed out of the party. He acknowledged “big generational differences in perception when it comes to gay marriage and gay rights as an agenda, and I think that is true on the Republican side.”

But, Gillespie said, he does not envision the party platform changing anytime soon.

Gillespie acknowledged that the party had been inhospitable to gays in the past, and said that he hopes Mehlman’s decision to come out leads the party to be “more respectful and civil in our discourse” when it comes to gays.

Because there was no reason to treat them respectfully before.