But it’s not supposed to be funny! 😆 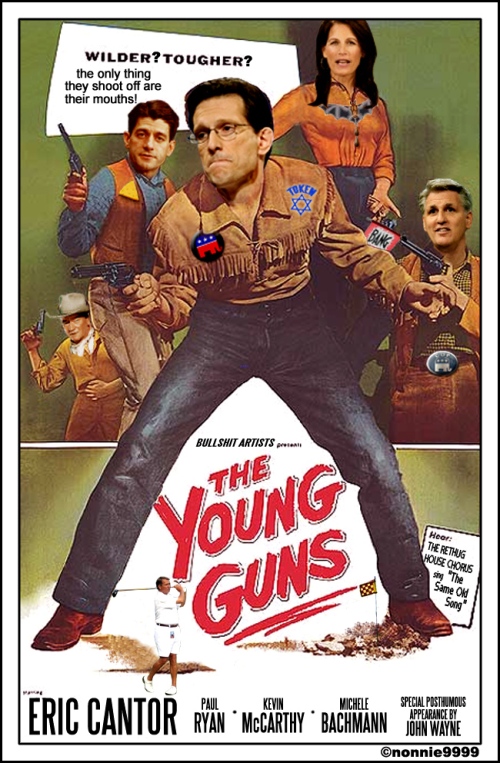 All the egotistical self-praise from the “young guns” was too much for former Republican congressman and MSNBC host Joe Scarborough. This morning, he and his crew incessantly mocked the new marketing campaign, debating whether it was a “parody.” “Never make up your own nickname,” cautioned co-host Willie Geist. Scarborough joked that the three congressmen “were” the future of the Party until their latest ego trip.

Another challenge posed by the rollout is that Cantor has thus far been unwilling to publicly embrace his co-author Ryan’s budget roadmap, which is included in the book.

Recall, Ryan’s “roadmap” includes privatizing Social Security and Medicare, while at the same time repealing the estate and corporate taxes. The Ryan roadmap would lose $2 trillion over a decade, while requiring 90 percent of taxpayers to pay more, according to an analysis by the Citizens for Tax Justice.

On repeated occasions, including in recent interviews with Laura Ingraham and the National Review, Cantor has been asked directly whether he’d be willing to endorse the Ryan roadmap, and he has pointedly refused to do so.

(Watch the Squintborough clip at the THINK PROGRESS link)

And speaking of guns, from CITY PAGES (blog):

Michele Bachmann has been carting around embedded journalists this week on a carefully scripted bus tour designed to show her constituents that the Washington spotlight really hasn’t gone to her head.

But when she stopped in at the Federal ammunition factory in Anoka to blow off a little steam with both a semi-automatic and automatic rifle, the well-known gun rights advocate disappeared from view.

The media blackout was finally pierced by a couple of Federal employees. They told reporters that the congresswoman was firing at human-shaped targets.

More on that tomorrow, kids.

30 responses to “Shooting the Bull”