Tears of a Bronzo the Clown

One of the perks of being in the Fourth Estate is that sometimes you get the transcripts of news shows before they air. So it was with great delight that I read the “60 Minutes” interview with Speaker-designate John Boehner (R-Ohio). It read well, especially the stuff on how “dark skin” Boehner was as easily prone to crying as the Pillsbury Doughboy was prone to giggling when poked in the stomach. But, man, when I watched the interview, I kept thinking, “Dude, c’mon!” 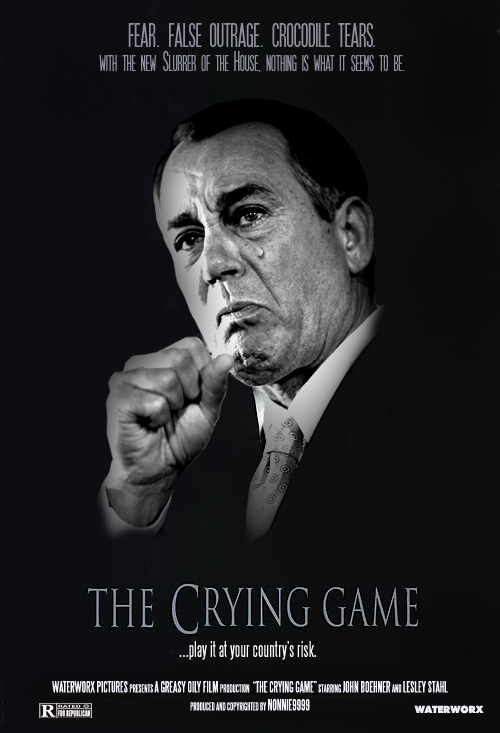 Original movie poster
(About time I update that poster!)

Boehner blubbers twice in front of Lesley Stahl during the interview. […Y]ou will see his face uncomfortably contort as he talks about why he refuses to visit schools anymore. And then he does it at the end of the interview with his wife by his side.

As I wrote last month about Boehner’s election night waterworks, he humanized himself with his tearful talk of working hard to achieve the American Dream. That being said, watching Boehner cry while saying that he can’t visit a school anymore was a bit much.

Stahl: On election night, what made you sad, what got to you that night?

Boehner: I was talking, trying to talk about the fact that I’ve been chasing the American Dream my whole career. There’s some things that are very difficult to talk about. Family. Kids. I can’t go to a school anymore. I used to go to a lot of schools. And you see all these little kids running around. Can’t talk about it.

Boehner: Making sure that these kids have a shot at the American Dream, like I did. It’s important.

But I’m still trying to square this heartfelt concern with Republican opposition last month to extending the unemployment insurance (while supporting tax cuts for the wealthy) that might help keep the parents of those “little kids running around” from sliding deeper into economic misery.

44 responses to “Tears of a Bronzo the Clown”