More Support Than an 18-Hour Bra

Conservative billionaire David Koch, co-owner of the $110 billion dollar Koch Industries chemical and petroleum conglomerate, provided a “lengthy” interview to Boston Globe reporter Stephen Smith yesterday. Smith asked about Ian Murphy’s prank call to Gov. Scott Walker (R-WI). Walker, who thought he was speaking with David Koch, bragged about his union busting campaign, joked about using a baseball bat against his opponents, and confessed that he had considered planting trouble makers in the protest crowd. According to Smith, Koch was both “amused and bemused” by the prank, but said he has “no relationship with the governor and didn’t directly support him.”

And why in the world would we get that mistaken impression? 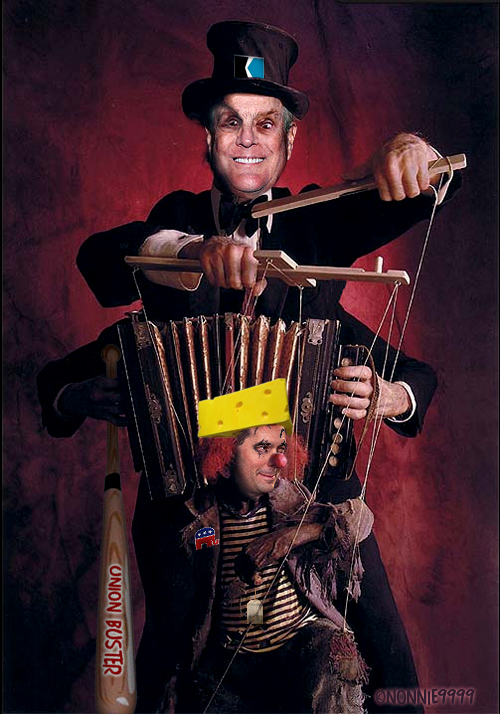 But through political action committees and right-wing front groups, Koch has actually provided much of the muscle for Walker’s election and his current anti-labor power grab:

– Koch’s other front groups have marshaled support for Walker. The American Legislative Exchange Council, a group financed with nearly $500,000 in Koch money and lead in part by a Koch executive, has pushed anti-public sector union legislation to Walker and the Wisconsin GOP.

Despite Koch’s contention that he has not “directly” supported Walker, during the prank call between Murphy and Walker, Walker said he was coordinating with “your guy on the ground” — presumably referring to Tim Phillips, a top political deputy to David Koch and current president of Americans for Prosperity. Phillips, a former associate of Jack Abramoff, has a history of anti-Semitic smear campaigns and lobbying work on behalf of a forced-abortion sweatshop owner.

16 responses to “More Support Than an 18-Hour Bra”