The Pain in Maine’s Due Plainly to His Reign

Yesterday, the Raisin reported on Governor Paul LePage of Maine ordering the Department of Labor to remove a mural that celebrates the history of labor in the state. There’s going to be an awful lot of blank wall space, so I thought we’d try to help and suggest a replacement. I did a little digging, and i found out about something called the Maine Heritage Policy Center. From WLBZ (Bangor):

Tarren Bragdon has risen to a position of influence as CEO of the Maine Heritage Policy Center, and was the leader of Gov. Paul LePage’s transition team. He goes In the Arena with Pat Callaghan to talk about the efforts to shrink the state budget and reform government.

The Maine Heritage Policy Center says Gov. LePage’s proposed budget doesn’t make enough cuts. The center believes Maine should cut 4,000 state jobs. Bragdon talks about that, as well as collective bargaining rights for state employees, and Gov. LePage’s decision to create private advisory groups to counsel him on business matters– which will not be subject to Maine’s open meeting laws.

Why is that important?  Well, this is from Dirigo Blue:

Trevor Bragdon has stepped down as the State Director of AFP Maine, and will be replaced by long-time Republican legislator Carol Weston.

AFP Maine is a chapter of Americans for Prosperity, an AstroTurf front group founded by David Koch, a major funder of libertarian groups across the country. Trevor Bragdon is the brother of Tarren Bragdon, the Executive Director of the conservative Maine Heritage Policy Center (MHPC), and one of the co-chairs of Gov. Paul LePage’s transition team. MHPC has ties to the Heritage Foundation in D.C., which also receives money from the Charles G. Koch Charitable Foundation.

Anyone else think it’s quite a coincidence that the Koch brothers’ names keep popping up when anyone is discussing the new Republican governors who are trying to pull the rug out from anything that’s good for the middle class and the poor?  With that in mind, I’ve come up with a picture that I think will look just great on the walls of the Maine Department of Labor. 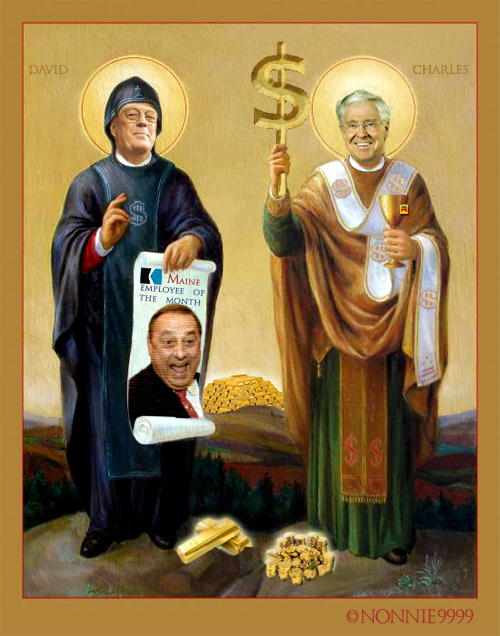 Reporting for the progressive Maine blog Dirigo Blue, Gerald Weinand has discovered that a proposed “right to work” law in Maine mirrors similar proposals in several other states, like New Hampshire and Missouri. The legislation in Maine, LD788, sponsored by State Rep. Tom Winsor (R), would make Maine like other low-wage anti-labor states by weakening unions. Right to work laws typically allow workers to opt-out of union dues while benefiting from union contracts, a cycle that usually kills a labor union over time. But the assault on worker rights in Maine appears to be part of a larger attack coordinated by conservative front groups. Winsor’s bill contains phrases and language strikingly similar to other right to work proposals from Republicans across the country:

The conservative strategy for decimating the labor movement is being replicated with great speed — and little creativity. Each state, from Wisconsin, to Ohio, to Maine, and others across the country face a similar threat of phony Tea Party groups, business front organizations, and even nearly identical legislative proposals.

Maybe they should just put this over the doors of government offices: