Newt Gingrich really doesn’t like it when Barack Obama takes his advice. It’s not just true of intervention with Libya — it’s also the case with fighting global warming pollution. In short, Newt was for carbon cap and trade, until Obama became president:

February 15, 2007: “I think if you have mandatory carbon caps combined with a trading system, much like we did with sulfur, and if you have a tax-incentive program for investing in the solutions, that there’s a package there that’s very, very good. And frankly, it’s something I would strongly support.” [Frontline, 2/15/07]

April 4, 2009: “And now, in 2009, instead of making energy cheaper—which would help create jobs and save Americans money—President Obama wants to impose a cap-and-trade regime. Such a plan would have the effect of an across-the-board energy tax on every American. That will make our artificial energy crisis even worse—and raising taxes during a deep economic recession will only accelerate American job losses.” [Newsweek, 4/4/09] 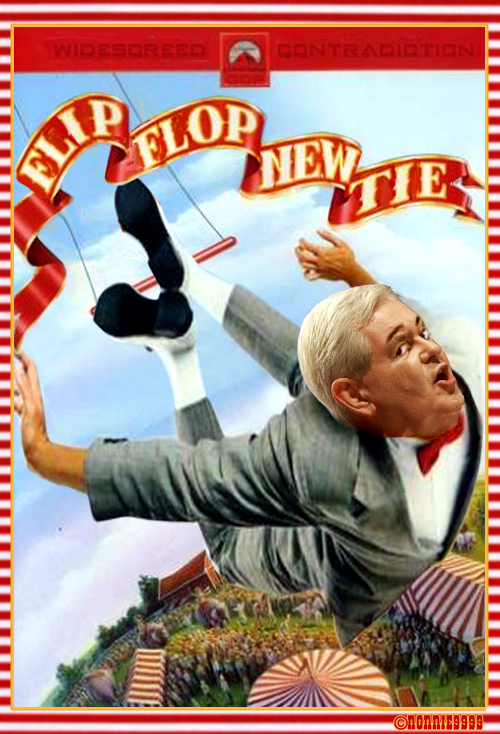 Gingrich’s full record on global warming is actually a series of epic flip-flops over more than two decades, with his positions mostly coinciding with whether the party holding the presidency is a Republican or a Democrat. Since 1989, when Gingrich supported aggressive climate action against “wasteful fossil fuel use,” until today, as he proposes abolishing the Environmental Protection Agency, the level of carbon dioxide in the atmosphere has risen from 353 ppm to 391 ppm (from 26 percent above pre-industrial levels to 40 percent above), and the five-year global mean temperature anomaly has nearly doubled from 0.3°C to 0.56°C.

See all the flips and flops over at The Wonk Room link.