WASHINGTON — Near the end of his speech before the Faith and Freedom Coalition conference Friday night, former Minnesota Governor Tim Pawlenty began to recite 2 Chronicles 7:14, the verse he said Ronald Reagan laid his hand on while taking the presidential oath of office.

Oy, it’s always What Would Ronald Reagan Do, isn’t it? 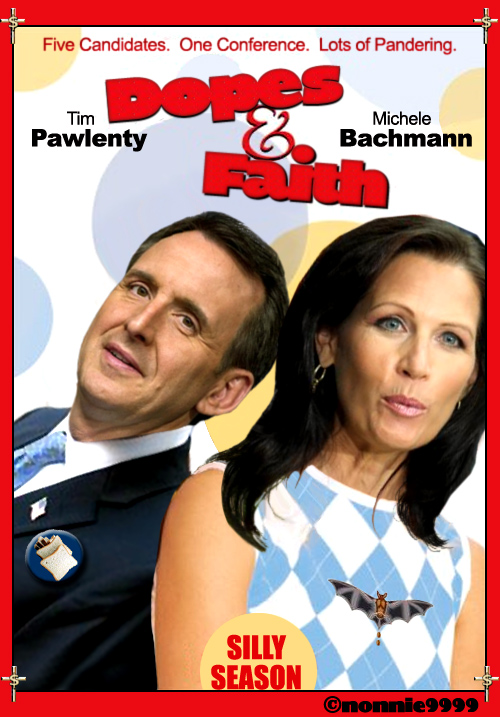 Pawlenty was one of seven declared or potential Republican presidential candidates to speak at the conference, organized by Ralph Reed’s coalition of evangelical and social conservatives. Five of them spoke Friday — Pawlenty, Mitt Romney, Jon Hunstman, Ron Paul and Minnesota’s Michele Bachmann

Of them, Bachmann is perhaps the most vocal on social issues. Hunstman, for example, has voiced support for civil unions, and while Romney and Pawlenty may support similar policies as Bachmann, they have to this point run a campaign focused almost exclusively on fiscal issues.

Much of Bachmann’s speech focused on social issues that played heavily on the audience’s sensibilities — opposition to gay marriage and abortion, support for defunding Planned Parenthood and a desire to defend Israel.

The crowd cheered Bachmann frequently during the speech, but the line that got the biggest response involved her opposition to a fiscal issue — the health care reform law Congress passed last session.

“I will not rest until we repeal ObamaCare,” she said to a standing ovation.

Pawlenty did play to the crowd, offering support for some social issues that had become standard talking points for the convention’s speakers. For Pawlenty, they came mostly in the form of rapid-fire quotations in the middle of his speech.

On opposing abortion: “You can’t have a quality of life if you don’t have a life.”

On opposing gay marriage: “Traditional marriage … should be put on a platform, it should be protected.”

On supporting Israel: “We need a President of the United States who stands shoulder to shoulder with our friend Israel.”

The rest of his speech was a well-worn campaign message about economic policy and what he called the “broken promises” of Barack Obama’s 2008 campaign.

Romney, likewise, delivered a message largely similar to those he’s given before, based on the contention that “Barack Obama has failed the American people.”

He painted unemployment and increased government debt as moral tragedies, but he shied away from social issues that had won applause for other speakers.

Bachmann is known nationally as a Tea Party favorite, but she also struck a chord here with a conservative audience holding generally stronger social rather than fiscal views.

34 responses to “Creeps of Faith”