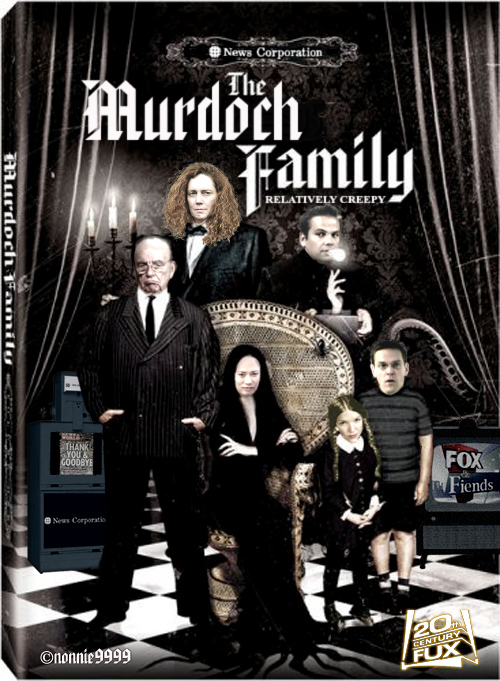 Seasoned Murdoch-watchers and corporate crisis experts say Murdoch’s dream of having one of his own take over his media empire is fading, and could be the next casualty in a crisis that has already killed a newspaper, cost two of Britain’s top police officers their jobs and left British Prime Minister David Cameron struggling to explain why he hired a former News of the World editor as his communications chief.

The scandal has also opened up splits in the family. On August 5, News Corp said Elisabeth Murdoch, Rupert’s eldest child from his second marriage to Anna Torv, would not take a seat on its board as expected. A company insider said Elisabeth’s position had become untenable after she lashed out at her brother James and ex-News of the World editor Rebekah Brooks, blaming them for the crisis, before flying out of Britain on holiday just as the rest of the clan was gathering in London to deal with the crisis.

Murdoch has spent decades grooming his three children from his second marriage to inherit the company built on the foundations that his father Keith left him.

In the past few years it was James who emerged as the favorite. After dropping out of Harvard, Murdoch’s second son helped start hip-hop record label Rawkus Records — which News Corp soon bought, returning James to the family fold. After turning around StarTV in Asia he became chief executive of British satellite broadcaster BSkyB, in which News Corp owns a large minority stake.

His appointment at age 30 to run a FTSE-100 company sparked complaints about nepotism, but he proved a capable executive. In 2007, he took over as head of News Corp’s operations in Europe, Asia and the Middle East.

James, now 38, was far away in Hong Kong when the worst of the phone hacking so far uncovered happened, but he has been drawn into multiple investigations connected to the affair because of suspicions the company later covered up its activities.

MP Tom Watson, Murdoch’s most dogged parliamentary questioner, asked him whether he knew about a crucial email that proved more than one reporter was involved.

James replied: “No, I was not aware of that at the time.”

Two days later, however, News International’s recently departed chief counsel of 26 years’ standing, Tom Crone, and ex-News of the World editor Colin Myler released a statement saying they had told Murdoch about the email at the time. Murdoch said he stood by his statement and is expected this week to submit a written clarification of his evidence to the parliamentary committee. The committee may recall him in person.

Despite the heat, BSkyB directors voted unanimously last month to keep James as chair. His performance in parliament was generally applauded by U.S. shareholders — although it was less well received in Britain, where commentators thought him at times evasive and arrogant.

[Media consultant Steve Hewlett said,] “The picture that James presented of himself was essentially as a dupe. Would you trust this man with your pension fund? Irrespective of what emerges, it’s very hard to see how James succeeds his father.”

Earlier this year, Rupert paved the way for Elisabeth to rejoin the company as a senior executive by agreeing to buy her television company Shine for 415 million pounds ($675 million).

The deal — brokered before the News of the World scandal really blew open — sparked a shareholder lawsuit by a trustee for several retirement funds.

“Murdoch is causing News Corp to pay $675 million for nepotism,” said the lawsuit filed in Delaware’s Chancery Court, which News Corp is contesting, adding that Rupert was treating the company “like a family candy jar.”

On Friday, Viet Dinh, the board member in charge of corporate governance, issued a statement saying Elisabeth’s nomination to the board would be “delayed” at her own request.

Elisabeth and her second husband, public relations guru Matthew Freud, the great-grandson of Sigmund Freud, form the core of a powerful web of friends that includes Prime Minister Cameron and ex-News of the World editor Brooks.

She and her husband sometimes departed from the company line before last month’s falling-out. Last year, Freud told the New York Times he was “ashamed and sickened” by the journalistic standards of Roger Ailes, head of News Corp’s conservative U.S. network Fox News, and said he was “by no means alone within the family or the company” in his views.

And while Elisabeth may be an accomplished businesswoman, it would be a huge leap from running a 300-million-pound privately owned company to a $33 billion public corporation, says [Sydney Finkelstein, professor of management at Dartmouth College].  “I can’t imagine another company’s board of directors feeling confident about Liz Murdoch as CEO. If it happens, it would be a royal ascension to the throne, not world class corporate governance,” he says.

Seen as Rupert’s most likely successor for a time after Elisabeth left BSkyB, [the elder son] Lachlan, 39, resigned from his executive positions at News Corp in 2005 after he lost out in a power struggle with Ailes and then-Chief Operating Officer Peter Chernin. Lachlan has never commented on his reasons for leaving but people personally and professionally close to Lachlan and Rupert at the time said he felt his father had undermined him by going over his head in important decisions relating to Fox TV.

Of the three, Lachlan has been the most involved with the newspaper business.

A tattooed extreme sports enthusiast, he has some experience of running a public company — this year he stepped up as interim CEO of Ten Network Holdings, a billion-dollar commercial TV network. But he has also lost millions in two business ventures in Australia.

“It looks like Lachlan has come out of this (the News of the World scandal) OK,” says Australian investigative journalist Neil Chenoweth, who has written two books about Rupert Murdoch and his business. “But I think Lachlan’s refurbishment and corporate redemption have a little way to go yet.”

Rupert Murdoch has three other children but none are likely to take over — at least any time soon. His eldest daughter Prudence, the only child from his 11-year first marriage, has had little to do with running the family business although she does sit on the board of Times Newspapers, part of News International. Rupert Murdoch’s two youngest children, Grace and Chloe, with third wife Wendi, are just eight and 10.

A post-Murdoch News Corp would probably look a lot more like an ordinary company. A new CEO would likely come under pressure from shareholders to sell off the newspaper business. Chief Operating Officer Chase Carey is known to have no love for the newspapers, which accounted for $530 million of the company’s $4 billion operating profit last year, and 20 percent of revenues.

Part of the problem is that Murdoch is so closely identified, both by others and by himself, with News Corp. This makes it almost impossible for him to step aside — even for one of his children. He considered relinquishing the CEO role a year ago to Carey but decided against it, according to [a] News Corp insider. On Wednesday, Murdoch plans to take part in a News Corp quarterly earnings call for the first time in a year: Carey has been handling Wall Street’s questions. Asked in last month’s parliamentary hearing whether he had considered resigning, he answered simply: “No.”