[Rick] Perry, who got into the 2012 race on Saturday, partly overshadowing Representative [Michele] Bachmann’s win at the Iowa Straw Poll in Ames, accepted an invitation to the Black Hawk County Republican Party dinner in Waterloo, Iowa last week.

Once she heard the Texas governor would be attending, aides to Mrs Bachmann, who was born in Waterloo, contacted the organisers to say that she would like to speak too. This set up a joint appearance that one Iowa politician predicted would be like the “shoot-out at the OK Corral”.

There was no confrontation but Mrs Bachmann’s move backfired. “She didn’t sit down to visit with us and eat with us,” said Mel Shaw, 57, one of the attendees.

“She came into the room like she was Madonna or something, a big star appearing before all us little people. She didn’t want to answer questions. That’s not the way we do politics here.” 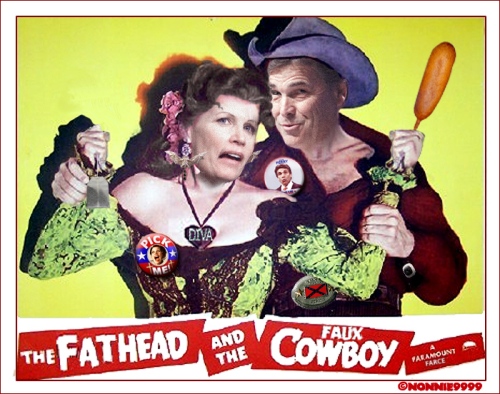 Mrs Bachmann’s Ames win confirmed her position in the top three candidates, along with Mitt Romney, the former Massachusetts governor front-runner, and Mr Perry.  But the Texas governor threatens to make major inroads into her support among evangelicals and Tea Party activists.

It was Mr Perry’s first appearance in Iowa, which is due in February to be the crucial first state to vote in the Republican contest to pick a nominee to face President Barack Obama, and he had some ground to make up after deciding not to compete at Ames.

After settling into his seat at a table, he listened intently to speeches from local Republican officials and an Abraham Lincoln impersonator before delivering his own address, which was enthusiastically received.

Vowing to veto any bills from Congress increasing the country’s debt, he pulled out a Sharpie pen and thundered: “The president of the United States has a pen, and it’s called a veto pen. And I’ll use that until all of the ink runs out to get the message across that we’re not spending all the money.” After the speech, he took several questions.

Mrs Bachmann had made clear to organisers that she did not want to be in the hall while Mr Perry was speaking. Instead, she waited in her campaign bus as it idled outside a nearby hotel.

When Mr Perry had finished, he went back to his seat to listen to Mrs Bachmann. But it took more than five minutes for her to reach the stage as the lighting was changed and the Minnesota congresswoman signed autographs.

During her speech, Mrs Bachmann, who was lit much more brightly than Mr Perry, mentioned the Abraham Lincoln impersonator but not the Texas governor, who smiled and applauded periodically.

Mrs Bachmann emphasised her Waterloo roots, stating she was “a real person … a champion, a fighter, somebody who’s going to stand up and have guts”. She did not take questions.

Afterwards, Mr Perry waited at his table until it became apparent that Mrs Bachmann, protected by a phalanx of aides and signing more autographs, was not going to move over to talk to him.

At a press conference afterwards in which just three questions were allowed from designated reporters, Mrs Bachmann brushed aside suggestions she had deliberately snubbed Mr Perry.

31 responses to “When Parry Met Silly”