Yes, [Rick] Perry is passionately anti-government, or at least anti-this-government. But the man who suddenly tops the Republican presidential polls is no libertarian. Rick Perry is a theocrat.

And he’s not the only one.  I’m lookin’ at you Michele Bachmann and Sarah Palin! 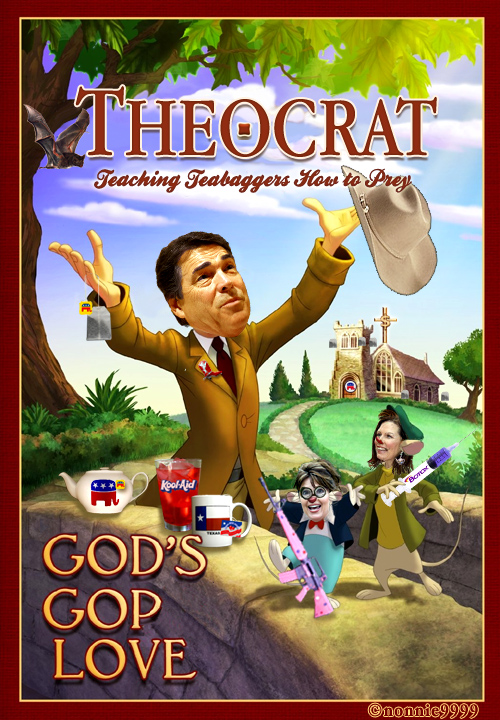 By his own account, he is a cultural warrior, seeking to save marriage, Christmas and the Boy Scouts from liberals, gay people and moral relativism. His latest treatise, the Tea-Party-inspired “Fed Up!,” touches only briefly on matters such as abortion and gay marriage. For an eyeful of the full Perry, crack his 2008 book, “On My Honor.” While the rest of the political world was reading Cheney’s attacks on Colin Powell, I read about Perry’s attacks on gay scoutmasters.

In the book’s most talked-about passage, he likens homosexuality to alcoholism. “Even if an alcoholic is powerless over alcohol once it enters his body, he still makes a choice to drink,” Perry writes. “And, even if someone is attracted to a person of the same sex, he or she will makes a choice to engage in sexual activity with someone of the same gender.”

Perry’s politics are religious in a way not seen before in modern-day mainstream presidential candidates. “Either faith in Christ can cleanse all people of their sin, or none, but not some,” he writes. “The truth of Christ’s death, resurrection, and power over sin is absolute. . . . What we believe about it does not determine its truthfulness.”

Perry has no use for those who “want to recognize Jesus as a good teacher, but nothing more.” Of those non-Christians, Perry asks, “why call him good if he has lied about his claims of deity and misled two millennia of followers?”

The governor forecasts divine punishment for those who hold different political views. “Shall they stand before God and brag that they fought to scrub His glorious name from the nation’s pledge?” he asks. “Shall they seek His approval for attacking private organizations merely because these organizations proclaim His existence?”

So it all comes back to the Boy Scouts.

My problem with Perry’s zeal is one of my problems with the Tea Party generally: Though it claims to be libertarian, it is remixing the religious right’s greatest hits.

In a series of hoary bromides, the supposedly libertarian Perry condemns the “litigious advocates of licentious behavior” (that’s the ACLU) and informs us that “Sometimes the rules must protect society at large at the expense of individual expression when that expression is deemed harmful to others and society at large.”

Among the things Perry “deems” harmful: universities (students “have been taught that corporations are evil, religion is the opiate of the masses, and morality is relative”); human rights commissions (“often nothing more than a front for attacking institutions that teach traditional values”); and evolution (he says “the weight of evidence” supports intelligent design). Perry polishes the old “war on Christmas” chestnut and finds a way to cast Mitt Romney (now his rival for the nomination) as a defender of gay scoutmasters.

Though he speaks now as a small-government conservative, Perry argues in his book: “We are close to a tipping point in American society. If you believe there is right and wrong, that there are acceptable standards of behavior . . . then you have a stake in this war. If the attackers win many more victories . . . the culture war may be lost before we know it. If that happens, we will find ourselves living in a world where moral relativism reigns and individualism runs amok. Now is the time to enlist in this effort, to stand up and be counted.”