When Sen. Marco Rubio took that awkward break from his State of the Union response to take a sip of water, some questioned whether it would mean the end of his political career. Instead, Rubio has shown how to capitalize on a viral sensation—even one that made him look bad—to raise some cash. The Florida senator has now raised more than $100,000 for his Reclaim America political action committee by offering a branded water bottle to anyone who donates $25 or more. 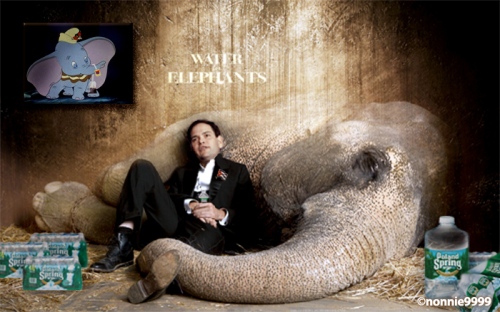 I have questions, kids.  For example:

Is Marco Rubio a Rethuglican because he has the same ears as Dumbo?  Seriously, I wouldn’t want to stand next to him in a strong windstorm.

Does he have any other credentials other than being Cuban?

Why does Dumbo Rubio love PACs so much?  Keep reading, kids…

That might be true for you. But it’s not true for Marco Rubio.

For Rubio, a rising star in the Republican Party, more government did indeed create more opportunities. As the Tampa Bay Times reported during his U.S. Senate run in 2010, it’s hard to determine with Rubio where politics stops and the private begins:

As Rubio climbed the ranks, he began to use little-noticed political committees to fund his travel and other expenses and later had a Republican Party of Florida credit card.

What emerged, records show, is a pattern of blending personal and political spending. Over and over again Rubio proved sloppy, at best, in complying with disclosure requirements.

Virtually broke, the 31-year-old lawmaker began campaigning to be House speaker in 2003 and created a political committee — Floridians for Conservative Leadership — to help elect other Republican candidates and curry their support.

With his wife serving as treasurer, Rubio did not wait for the state to authorize the committee before accepting campaign donations.

The committee listed its address as Rubio’s home, a modest place he and his wife bought in West Miami in 2002, but reported spending nearly $85,000 in office and operating costs and $65,000 for administrative costs.

HuffPost has previously noted the extent to which the government and private sector overlap for Rubio:

In his speech Tuesday, Rubio spoke about the desire to defend his neighbors from Obama’s tax-and-spend policies. “Mr. President, I still live in the same working class neighborhood I grew up in. My neighbors aren’t millionaires,” he said.

Rubio recently put his house up for sale for un-working-class price $675,000. His spokesman told The Daily Caller that he hopes to use the money to buy a house in Washington.