Kids, I don’t know whether to laugh or cry (Boohoo Boehner always goes with the latter). Do we celebrate the demise of Widdle Ewic Cantor’s political career, or do we mourn the fact that Teabagger fruitcake David Brat just might be the next asswipe in Congress? 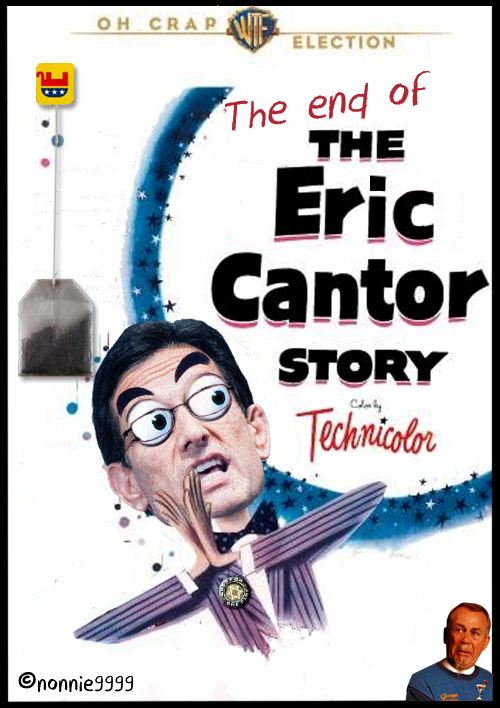 Eric Cantor is gone, and if they’re not careful, John Boehner and Kevin McCarthy could be next.

The earth-shattering upset in Virginia’s seventh district Tuesday night means that Cantor, the House majority leader who has long been considered the heir-apparent to Boehner as speaker, won’t be back in the next Congress.

And his loss is a significant victory for a growing group of frustrated House Republicans who have been plotting to shake up the GOP leadership structure ahead of the 114th Congress. Those plans have centered on ejecting Boehner from the speakership, and then hoping for a consensus candidate to emerge who could either challenge Cantor for the top job, or at least slide in behind him as majority leader.

But Tuesday night’s shocker turns those plans upside down.

Those conservatives, suddenly smelling blood in the water, might now be emboldened to push for a wholesale change in leadership – ousting Boehner and McCarthy in this November’s conference elections, and entering the next Congress with a new top three.

“It should frighten everyone in leadership,” one conservative House Republican, who exchanged text messages on condition of anonymity, said shortly after Cantor’s defeat was official.

The approach taken by Boehner and Cantor may yet help Senate Republicans take back the majority. Ironically, it also might have ensured that they won’t be around to work across the Capitol with them.

What’s that old expression about a petard and hoisting oneself upon it?