That’s the accusation from Democrats this week, after embarrassing internal Democratic National Committee emails appeared on Wikileaks on the eve of the party’s convention in Philadelphia.

The emails were lifted earlier this year in a hacking breach that security experts have linked to Russian espionage groups. 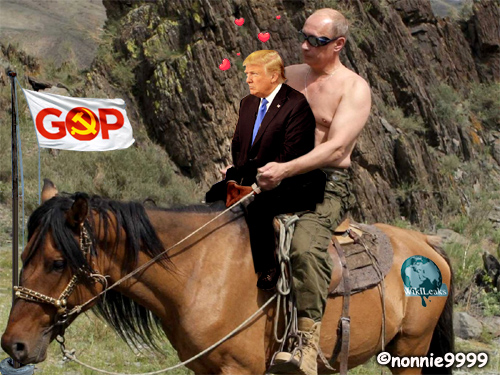 “Experts are now saying that the Russians are releasing these emails for the purpose of actually helping Donald Trump,” Hillary Clinton’s campaign manager, Robby Mook, told CNN on Sunday.

“That foreign actors may be trying to influence our election — let alone a powerful adversary like Russia — should concern all Americans of any party,” said ranking House Intelligence Committee Democrat Adam Schiff on Monday.

Still, Russia is the prime suspect behind the DNC hack. The security firm the party brought in last month to deal with the data breach immediately pointed fingers towardwhat it called “Russian espionage groups.”

“If [it’s a coincidence] it’s a really great coincidence,” said Russia expert Fiona Hill, who directs the Center on the United States and Europe at the Brookings Institution.

Hill said the Russian hackers may not be taking orders directly from Putin, but that they are clearly working with Russian foreign policy interests in mind.

“They don’t have to be run directly by the Kremlin. They can just be encouraged,” Hill said.

On a personal level, Trump said last fall that he and Putin “would probably get along … very well.” He has repeatedly praised Putin’s strength, particularly when it comes to military intervention in Syria.

And several advisers in Trump’s orbit have close ties to Russia and Russian interests. Retired Lt. Gen. Michael Flynn, who advises Trump on foreign policy, raised eyebrows in Washington by sitting at a table with Putin during a gala for the state-run English language news channel Russia Today last year. And Trump’s top adviser, {Paul] Manafort, has done political consulting work for Ukrainian politicians viewed as allies to Russia.

More consequential for Moscow: Trump’s repeated skepticism about the value and strength of the NATO alliance, which formed the pillar of Western Europe and North America’s opposition to the Soviet Union over the past half century.