The Art of the Squeal

There is much speculation about the tiny-handed Cuckwreck Orange’s choice for Secretary of State. Apparently, there are still lots of people in contention, including whackadoodle Rudy Giuliani, scary-ass John Bolton, Tennessee asshole Senator Bob Corker, and the latest beauty contestant, former Ford CEO Alan Mulally. Of course, the most talked-about possibility is Mitt Romney. Personally, I think Wisconsin weasel Reince Priebus was pushing Mittsie. I guess he figured that the administration needs at least one grown-up. However, curmudgeon and all-round piece of shit Newt Gingrich is against Mittsie (mostly because Mittsie is not Newtie), and the vile liar Kellyanne Conway hates his guts. 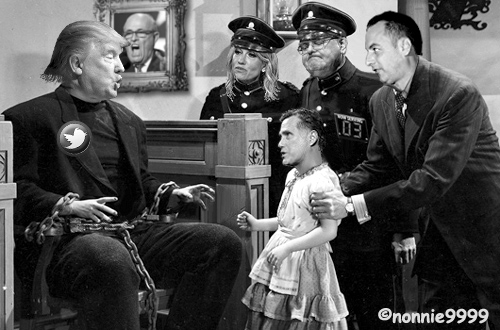 Now, this is just my opinion, but I never thought Trumpelthinskin was serious about Mittsie as Secretary of State. There is no move to appease the more rational members of the GOP. I think Hair Fuhrer wants to humiliate someone who dared to speak ill of him. Remember what Mittsie said? From CNN:

“But you say, ‘Wait wait wait,’ isn’t he a huge business success? Doesn’t he know what he’s talking about? No he isn’t. And know he doesn’t. His bankruptcies have crushed small businesses and the men and women who worked for them. He inherited his business, he didn’t create it. And what ever happened to Trump Airlines? How about Trump University? And then there’s Trump Magazine and Trump Vodka and Trump Steaks and Trump Mortgage. A business genius he is not.”

On whether Trump has the temperament of a president:

“This is an individual who mocked a disabled reporter, who attributed a reporter’s questions to her menstrual cycle, who mocked a brilliant rival who happened to be a woman due to her appearance, who bragged about his marital affairs, and who laces his public speeches with vulgarity.”

There are more at the link. What does Little Mittsie say now? From THE NEW YORKER :

[…] Romney explained that he was “very impressed by the remarks [the Orange Turd] made on his victory night.” He went on, “By the way, it’s not easy winning. I know that myself. He did something I tried to do and was unsuccessful in. He won the general election and he continues with a message of inclusion and bringing people together, and his vision is something which obviously connected with the American people in a very powerful way.”

If Pussygrabber-Elect wants to humiliate Mittsie, he has no greater accomplice than Mitt Romney.

14 responses to “The Art of the Squeal”