These Boots Were Made for Talking

The support of the Florida Republican means Tillerson will clear a Monday evening in the Senate Foreign Relations Committee instead of facing an embarrassing “unfavorable” verdict by the panel. Rubio’s decision likely foreshadows unanimous GOP support for Tillerson, who had made some Republicans nervous about his closeness to Russian President Vladimir Putin and reluctance to criticize Putin’s actions during his confirmation hearing. 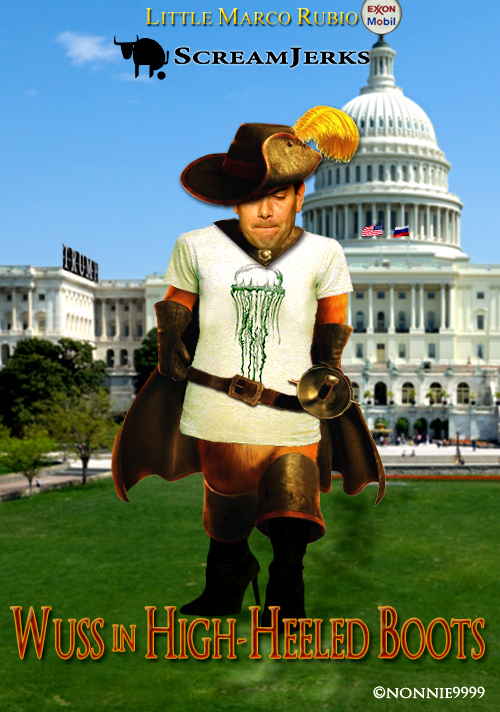 The Trump administration exerted a full-court press on Rubio in recent days. Rubio met with Tillerson last week and said afterward that Tillerson had addressed “some” of his concerns. Republican senators predicted that Rubio would ultimately vote for Tillerson, arguing it made no sense for the Florida senator to invite retribution from Trump just days into a new administration.

“By ignoring his serious reservations about Tillerson’s connections to Vladimir Putin, Marco Rubio is not only rolling over for Donald Trump, he’s earning the nickname Trump gave him: Little Marco,” said DNC Senior Adviser Zac Petkanas.

Tillerson’s nomination represented the first major confrontation between the Senate GOP and Trump, but ultimately the hawkish opposition to Tillerson dissolved as his confirmation vote drew near. First Sen. John McCain (R-Ariz.) said Sunday he will support Tillerson, then Sen. Lindsey Graham (R-S.C.) fell in line.

In other words…Just like every other time Little Marco, Grandpa Underpants and Lindseypoo have made a lot of noise about their deep-seated principles, you can be assured that they have none. They bring lots of attention to themselves, and then they cave in order to toe the party line. It’s happened time and time again, and it will continue to happen. Little Marco makes noise and stamps his tiny high-heeled boots, because he wants to run for president again. Grandpa Underpants grumbles so he will be invited to all the Sunday shows. Lindseypoo just wants to impress his boyfriend Captain Underpants. There is not an ounce of political courage among them.

10 responses to “These Boots Were Made for Talking”