A Little Veruca Salt to Rub in Steve Bannon’s Wounds?

Trump authorized a U.S. missile attack on a Syrian airbase on Friday in response to a chemical weapons attack allegedly committed by the Assad regime that killed scores of people, including more than 30 children.

“Ivanka is a mother of three kids and she has influence. I’m sure she said: ‘Listen, this is horrible stuff,’” Eric Trump told The Telegraph.

“My father will act in times like that,” Eric Trump added.

Hey! If that’s all it takes, maybe there’s a way to get rid of Steve Bannon quickly! 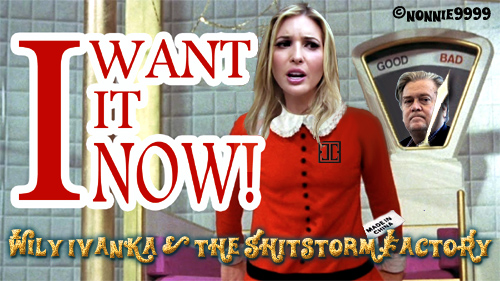 Donald Trump’s controversial relationship with the “alt-right” may be headed for an acrimonious split, as the president seems to be turning into what Breitbart trolls and InfoWarriors hate most in this world — a globalist cuck.

It all began last Wednesday when the White House announced that chief strategist Stephen Bannon, an alt-right sympathizer who formerly ran the right-wing website Breitbart News, had been removed from the National Security Council just two months after his controversial appointment. Though the White House downplayed his removal, it was reported that Bannon had threatened to resign, and was convinced to stay by top political donor and Breitbart investor Rebekah Mercer, daughter of the hedge fund billionaire Robert Mercer. News of Bannon’s demotion came with various reports detailing the increasing friction between Bannon and the president’s senior advisor and son-in-law, Jared Kushner, who reportedly pushed for Bannon’s removal from the NSC. One report from the Daily Beast cited unnamed White House staffers who alleged that Bannon has taken to calling Kushner a “globalist” and “cuck” behind his back.

Topping off the week of globalist triumph, it was reported on Friday that Trump was considering removing Bannon from the White House altogether, which would clear the way for Kushner and his allies to reshape the administration’s agenda. The following day, however, a White House official told the press that Bannon and Kushner had agreed to “bury the hatchet” after an hour-long meeting.

Nevertheless, though Bannon may be sticking around for a bit longer, it seems increasingly likely that his days in the Trump administration are numbered. According to Mike Allen at Axios, both Kushner and Trump’s daughter Ivanka Trump are pushing for a “more open process driven by the interests of the president, not ideology,” and believe that Bannon is “too inclined to want to burn things down and blow things up.” If Bannon cannot adopt a more “cooperative approach,” reports Allen, he will be fired (“Either Steve becomes a team player and gets along with people, or he’ll be gone,” said a top source).

5 responses to “A Little Veruca Salt to Rub in Steve Bannon’s Wounds?”