Before his election, Donald Trump repeatedly pledged to “make America great again”, laying out an ambitious plan for his first 100 days.

His “contract with the voter” lis­­­­­­ted 28 promises he would deliver.

Well, the 100 days are up today and so far he has lived down to expectations by failing to deliver on a single major issue.

In the run-up to the milestone day, he moaned: “This is more work than in my previous life. I thought it would be easier.”

But one thing the US President has managed is to achieve more mayhem and confusion than any of his 44 predecessors. 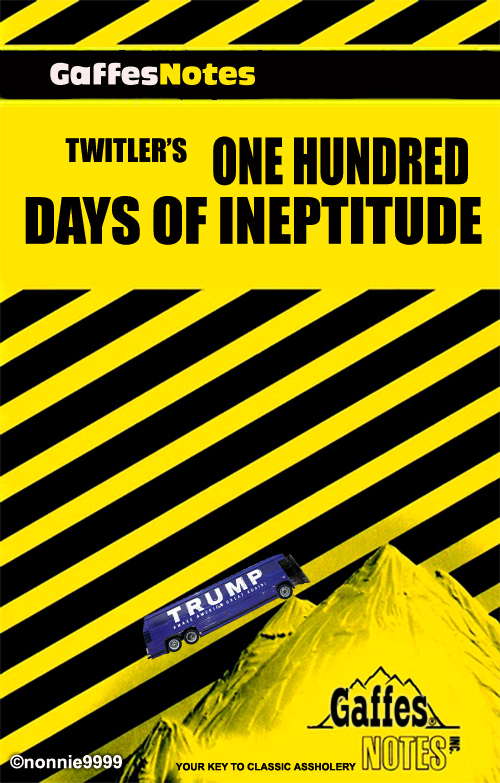 Since entering the West Wing he has become king of the 180 degree turn – re-imagining almost everything he has ever spoken about.

Among those flip-flops and failures:

Oh yeah, and he warned North Korea that naval carrier, the USS Carl Vinson, was on its way and ready to kick some ass. Except it was headed in a different direction.

And this isn’t even counting our favorite Press Secretary evah, Sean Foot-in-the-Mouth Spicer!  Like all men, Little Seanie has a tenuous grip on reality when it comes to size:

This was the largest audience to ever witness the inauguration, period, both in person and around the globe.

He tweeted his own password. Twice.
Holocaust Remembrance Day–Jews? What Jews?
The horrific terrorist attack in Atlanta that never happened.
“Joe” Trudeau, Prime Minister of Canada and Malcolm “Trumball” of Australia.
Repeatedly talked about the need to destabilize the Middle East (not sure if that was a gaffe or not).
Hitler wasn’t such a bad guy after all. He didn’t use chemical weapons…well, not counting the Holocaust centers. Happy Passover!
Paul Manafort had a “very limited role” in the Twitler campaign. He was the campaign manager.

But maybe we’re picking on them too much. It’s possible that none of these things ever happened, and the lying media just made up some alternative facts. Right, Kellyanne?

Have fun, kids, and add your favorites in the comments!

6 responses to “The Hundred Days Boor”