Guess Who Didn’t Come to Dinner!

If you didn’t see Hasan Minhaj at the White House Correspondence Dinner last night, you must correct that immediately! From Vox:

“This has been one of the strangest events I’ve ever done in my life,” Daily Show correspondent Hasan Minhaj said late in his set at Saturday’s White House Correspondent’s Dinner, before going on to say he felt like a tribute in the Hunger Games, waiting to see “if Steve Bannon is going to eat me.”

It was part of a good, but odd, performance from the comedian, who was hampered by the fact that the person he spent the most time making fun of — President Donald Trump himself — wasn’t in the room. (For his part, Trump accused the media of spreading “fake news” and said they deserved a “big fat failing grade” during a rally for supporters the same evening in Harrisburg, Pennsylvania.)

Hasan has been my favorite Daily Show correspondent for a while, but right now, to me he is…. 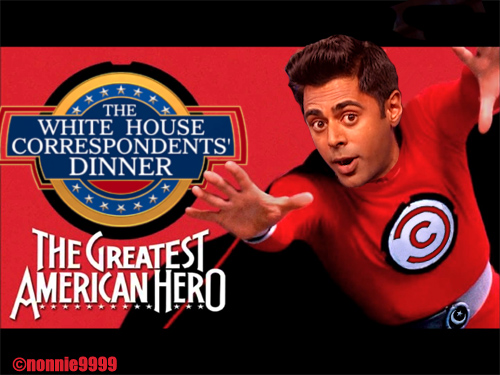 Yet it wasn’t as if Trump’s White House didn’t come in for its own scathing commentary. Minhaj, who is Muslim, particularly played off the fact that he was hosting in the first year of Trump’s presidency. (“Welcome to the series finale of the White House Correspondent’s Dinner!” was his very first joke.)

Though Trump laid into the dinner, Minhaj’s conclusion argued that its greatest usefulness was in showing that nobody in America — not even the president — is above the powers of the first amendment. And whether that takes the form of journalists investigating him, or comedians mocking him, it doesn’t matter. The Constitution protects their rights to do just that. And for Minhaj, that makes the WHCD worth it.

You can watch the entire speech/performance/spanking at the Vox link above.

4 responses to “Guess Who Didn’t Come to Dinner!”