Rod Rosenstein: Save yourself.

For years, the man who just became the No. 2 official in the Justice Department painstakingly built a reputation as a gifted prosecutor and an above-the-fray lawman, serving Democratic and Republican administrations alike.

Now, just over two weeks into his new job, he has become a national joke. 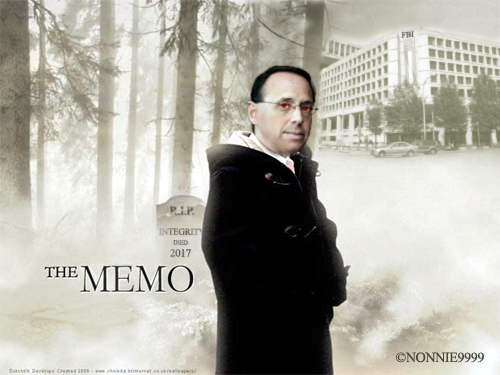 He has destroyed his credibility by giving cover and legitimacy to Trump’s decision to fire FBI Director James B. Comey, the man overseeing the agency’s probe of the Trump campaign’s possible collusion with Russia in tilting the 2016 election Trump’s way.

The Post reported that Rosenstein threatened to resign because the White House was turning him into a stooge. […] But Rosenstein says: No, he made no such threat.

[T]he most surreal happening this week was none of the above. It was the Wall Street Journal’s report that Rosenstein “pressed White House counsel Don McGahn to correct what he felt was an inaccurate White House depiction of the events surrounding FBI Director James Comey’s firing.” The Journal reported that “Rosenstein left the impression that he couldn’t work in an environment where facts weren’t accurately reported.”

Rosenstein can’t work in an environment where facts aren’t accurately reported? And yet he goes to work for the alternative-fact president, who, by The Post’s Fact Checker’s tally, churned out 492 false and misleading claims in his first 100 days?

Rosenstein is either the most naive man in town, or he’s not the honest man we all thought him to be. Let’s give him the benefit of the doubt and assume he’s an ingenue who was chewed up and spit out by the Trump White House, which commandeered his unsullied reputation to justify its Comey sacking and left his once-vaunted standing in tatters.

In that case, Rosenstein needs to wake up to the reality that he has been — and continues to be — used by Trump and his defenders to provide a veneer of legitimacy to the president’s decision to eliminate the head of the Russia probe.

Trump may now say he would have fired Comey anyway, but everybody else has used Rosenstein, and his three-page memo justifying Comey’s dismissal, as cover.

Rosenstein now makes Comey look like Solomon. If he cares at all about rehabilitating the reputation he built, Rosenstein has one option: He can appoint a serious, independent and above-reproach special counsel — the sort of person Rosenstein was seen as, until this week — to continue the Russia probe.