Now the world can hate him as much as we do!

The alpha-male handshake. The deadpan reaction from NATO leaders. The presidential push to the front of the pack.

Even if Donald Trump hasn’t done a lot of public speaking during his big trip abroad, the body language of the president and those around him has spoken volumes.

Day after day, with no presidential press conferences on the schedule, Trump watchers have instead parsed the president’s movements, and taken away messages that are at times painfully obvious, at times puzzling. 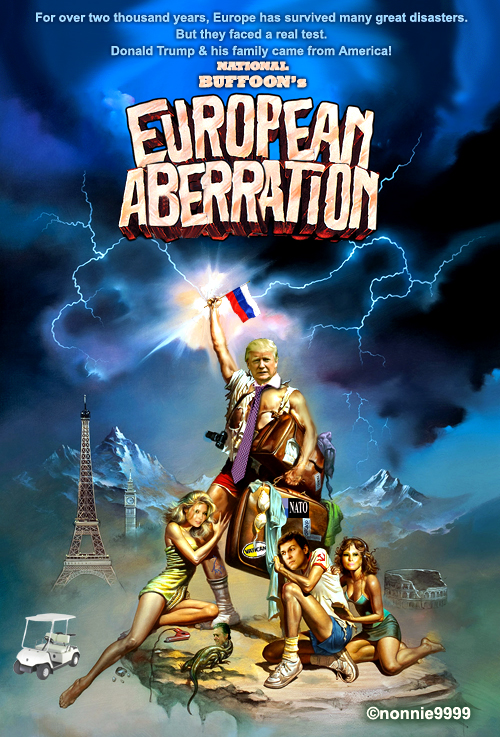 (Don’t strain your Raisinette eyes. The lizard is Steve Bannon, and it appears Jared Kushner is the most afraid of it.)

There was certainly any number of routine and friendly interactions between Trump and world leaders.

But there was no mistaking the cool reception of NATO leaders who stood by with stone faces on Thursday as Trump lectured U.S. allies about the need to spend more on defence.

That came on the heels of a straight-faced greeting from the pontiff. In a photo that quickly went viral, Pope Francis posed next to the president with a dour look while Trump grinned. Adding to the dissonant image, Trump’s wife, Melania, and daughter, Ivanka, stood next to the president, silently staring off into the distance, their sombre expressions heightened by their all black outfits.

Back in Brussels, after the outdoor NATO ceremony ended, as the leaders headed to their next event, most chatted and mingled, but Trump walked alone.

The scene repeated itself in Italy at the G-7 summit on Friday. After the “family photo” group shot, the other leaders convivially walked down the narrow Sicilian streets to their luncheon. Trump hung back and, minutes later, opted instead to ride in a golf cart.

At the NATO group shot on Thursday Trump’s move to get to the front of the pack again caused double-takes.

The president pushed himself past Montenegro’s prime minister, Dusko Markovic, to get to the front of the group as the NATO leaders walked inside the alliance’s new headquarters building.

“It seems Donald Trump did not want that anyone overshadows his presence at the summit,” said the Montenegro newspaper Vijesti.

Two days in a row, the president and first lady Melania Trump failed to connect when Trump reached out to grab his wife’s hand — interactions that were replayed in slow-motion and endlessly dissected online.

7 responses to “Now the world can hate him as much as we do!”