Instead of a travel ban, there should be a Twitter ban

From the New York DAILY NEWS:

A close ally of President Trump and the husband of one of his top advisers took to Twitter to bash the President’s Twitter habits on Monday, warning that Trump was undercutting his own legal standing in the court fight for his travel ban in order for short-term emotional gratification.

George Conway, Kellyanne Conway’s husband who recently took his name out of the running for a top Department of Justice job, tweeted Monday morning that Trump was hurting himself. 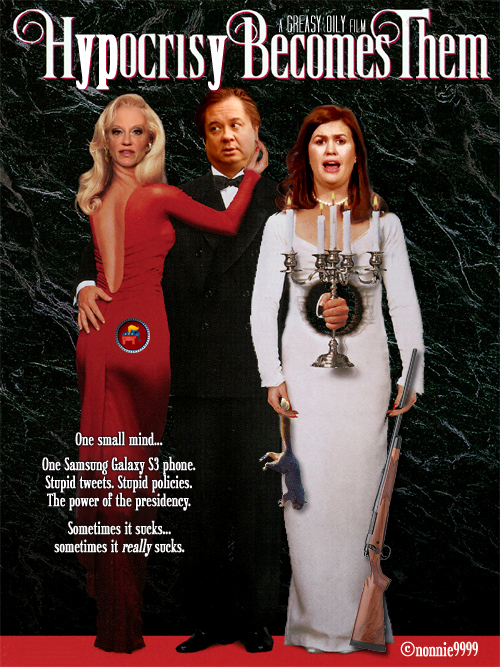 “These tweets may make some ppl feel better, but they certainly won’t help OSG [Office of the Solicitor General] get 5 votes in SCOTUS, which is what actually matters. Sad,” Conway tweeted, retweeting Trump’s early Monday morning tweet that “The Justice Dept. should have stayed with the original Travel Ban, not the watered down, politically correct version they submitted to S.C.”

That comment is remarkable coming from so close to the White House’s inner circle — especially since Conway, a top attorney, was until recently expected to take a job leading the Justice Department’s civil division.

While Conway said in a statement that he’d decided against taking the job because it “wasn’t the right time” to leave the private sector, this tweet suggests that Trump’s impulsive, self-destructive behavior played a role in Conway’s decision not to take the job.

The remark also stands in stark contrast to what his own wife said Monday morning.

Kellyanne Conway defended Trump on NBC’s “Today” show by arguing slamming the media’s “obsession with covering everything he says on Twitter and very little of what he does as President.”

Mr. Conway said he stood by both his wife and his President later on Monday, while arguing that he was simply trying to publicly convince Trump to stop shooting himself in the foot.

White House Deputy Press Secretary Sarah Huckabee Sanders dismissed Conway’s concerns Monday while breezing by questions about why Trump had decided to use the term “travel ban” after White House staff had assiduously avoided using the term after its rollout — and why he’d decided to sign the updated ban if he didn’t like it.

“I don’t think the President cares what you call it … He cares that we call it national security,” she said at a White House briefing Monday afternoon.

So, bottom line is that they don’t care what Twitler says or does, but they support what he says and does. Did I get that right?

2 responses to “Instead of a travel ban, there should be a Twitter ban”