From mildly nauseous James Comey‘s statement (read the statement in its entirety at POLITICO):

January 27 Dinner
The President and I had dinner on Friday, January 27 at 6:30 pm in the Green Room at the White House. He had called me at lunchtime that day and invited me to dinner that night, saying he was going to invite my whole family, but decided to have just me this time, with the whole family coming the next time. It was unclear from the conversation who else would be at the dinner, although I assumed there would be others.

It turned out to be just the two of us, seated at a small oval table in the center of the Green Room. Two Navy stewards waited on us, only entering the room to serve food and drinks. 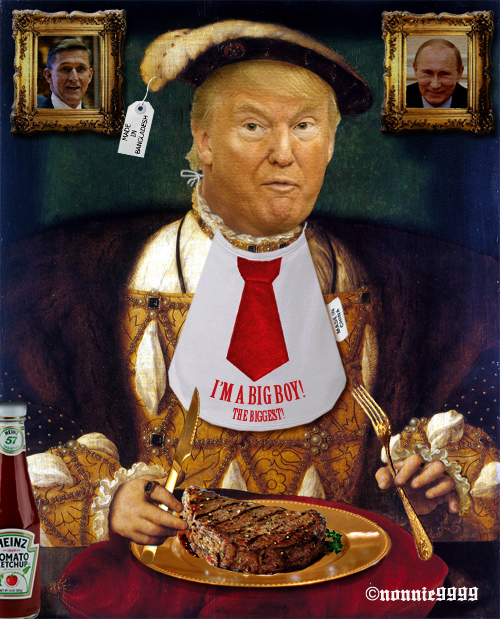 The President began by asking me whether I wanted to stay on as FBI Director, which I found strange because he had already told me twice in earlier conversations that he hoped I would stay, and I had assured him that I intended to. He said that lots of people wanted my job and, given the abuse I had taken during the previous year, he would understand if I wanted to walk away.

My instincts told me that the one-on-one setting, and the pretense that this was our first discussion about my position, meant the dinner was, at least in part, an effort to have me ask for my job and create some sort of patronage relationship. That concerned me greatly, given the FBI’s traditionally independent status in the executive branch.

I replied that I loved my work and intended to stay and serve out my ten-year term as Director. And then, because the set-up made me uneasy, I added that I was not “reliable” in the way politicians use that word, but he could always count on me to tell him the truth. I added that I was not on anybody’s side politically and could not be counted on in the traditional political sense, a stance I said was in his best interest as the President.

A few moments later, the President said, “I need loyalty, I expect loyalty.” I didn’t move, speak, or change my facial expression in any way during the awkward silence that followed. We simply looked at each other in silence. The conversation then moved on, but he returned to the subject near the end of our dinner.

At one point, I explained why it was so important that the FBI and the Department of Justice be independent of the White House. I said it was a paradox: Throughout history, some Presidents have decided that because “problems” come from Justice, they should try to hold the Department close. But blurring those boundaries ultimately makes the problems worse by undermining public trust in the institutions and their work.

Near the end of our dinner, the President returned to the subject of my job, saying he was very glad I wanted to stay, adding that he had heard great things about me from Jim Mattis, Jeff Sessions, and many others. He then said, “I need loyalty.” I replied, “You will always get honesty from me.” He paused and then said, “That’s what I want, honest loyalty.” I paused, and then said, “You will get that from me.” As I wrote in the memo I created immediately after the dinner, it is possible we understood the phrase “honest loyalty” differently, but I decided it
ouldn’t be productive to push it further. The term – honest loyalty – had helped end a very awkward conversation and my explanations had made clear what he should expect.

During the dinner, the President returned to the salacious material I had briefed him about on January 6, and, as he had done previously, expressed his disgust for the allegations and strongly denied them. He said he was considering ordering me to investigate the alleged incident to prove it didn’t happen. I replied that he should give that careful thought because it might create a narrative that we were investigating him personally, which we weren’t, and because it was very difficult to prove a negative. He said he would think about it and asked me to think about it.

As was my practice for conversations with President Trump, I wrote a detailed memo about the dinner immediately afterwards and shared it with the senior leadership team of the FBI.