It isn’t a surprise, but Senate Majority Leader Mitch McConnell kept his health care bill a secret because it is even worse than the House passed Trumpcare bill. 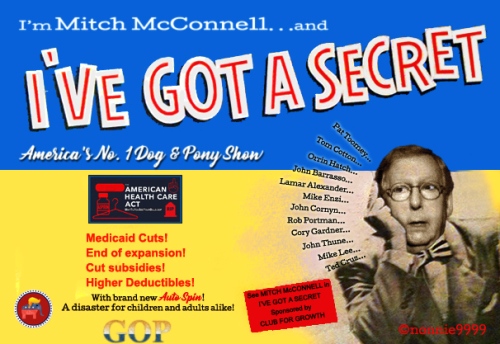 The Washington Post reported:
Subsidies are currently available to Americans earning up to 400 percent of the federal poverty level. Starting in 2020, that threshold would be lowered to 350 percent under the Senate bill — but anyone below that line could get the subsidies if they’re not eligible for Medicaid.

Yet the Senate bill would go farther than the House version in its approach to cutting Medicaid spending. In 2025, the measure would tie federal spending on the program to an even slower growth index than the one used in the House bill. That move could prompt states to reduce the size of their Medicaid programs.

Children and persons with disabilities are going lose their healthcare under the Senate bill. People will pay more out of pocket for their health care, and it is unclear at this time if preexisting conditions will be covered. The Senate bill does gut Medicaid, which also pays for 60% of nursing home care in the United States, and it will drive the cost of health insurance up for every American.

And, by the way, kids, Money has a list of the 12 white guys who, along with Yertle McConnell, were supposed to write the new AHCA. They are Senators Orrin Hatch, Lamar Alexander, Mike Enzi, John Thune, Mike Lee, Ted Cruz, Tom Cotton, Cory Gardner, John Barrasso, John Cornyn, Rob Portman and Pat Toomey. Other than being white, Christian and devoid of ovaries, let’s see what else they might have in common. Yertle McConnell, Hatch, Alexander, Enzi, Thune, Barrasso and Cornyn all list among their top 5 campaign contributor health insurance or health care services companies. One of the largest contributors to Lee, Cruz and Cotton is the good old Club for Growth. What are they all about? Cutting taxes! Hmm, just a coincidence that the new bill is rumored to be nothing more than a tax cut in disguise. The rich must have their tax cuts, and if some poor or middle-class people die, oh well! As for Gardner and Toomey, both those rascals are funded by health insurance companies and health care service companies, respectively,  and the Club for Growth. Double whammy for those guys. The only one who doesn’t list either insurance companies or health services companies in his Top 5 Contributor Hit Parade is Rob Portman. We all know that Portman’s son publicly stated that he is gay, and Portman announced that he still loved his kid, so nobody in the Rethuglican party is going to listen to him anyway.

Republican Senator Mike Lee of Utah was part of the 13-person working group that was slated to draft the Senate’s health care legislation. But not only has he not been involved in the writing process, Lee hasn’t even seen the bill.

“I’m told that it exists,” Lee said in a Facebook live video.

“It has become increasingly apparent in the last few days that even though we thought we were going to be in charge of writing the bill within this working group, it’s not being written by us,” Lee said. “It’s apparently being written by a small handful of staffers for members of the Republican leadership in the Senate. So if you’re frustrated by the lack of transparency in this process, I share your frustration.”