(CNN) President Trump’s fierce warning to North Korea was improvised in the moment, not part of a scripted statement that he prepared to deliver Tuesday, according to three people with knowledge of the remarks.

Trump has long been bothered by North Korean Leader Kim Jong Un’s threats against the United States and has privately vented about a powerful United States response to the rogue nation. His statement on Tuesday, flanked by top White House aides and his new chief of staff Gen. John Kelly, mimics those private remarks, a source said.

Two questions, kids. First, would anyone else put money on that quote being penned by Stephen Miller, and second, did anyone else immediately think of this: 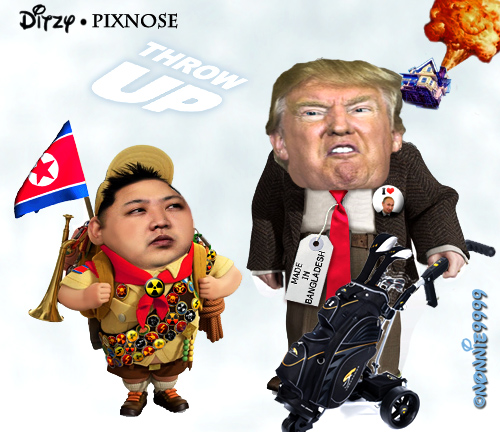 (Scroll down for another image from Up)

We probably won’t know until someone working in the White House needs a few rubles and writes a book of what happened behind the scenes, but I do not believe for a moment that Twitler ever thought up They will be met with fire, fury […] the likes of which this world has never seen before (especially when he’s busy playing golf at Bedminster). The only part he did think up (which I left out, because that is how the quote was probably originally written) was and frankly power, because that’s the kind of bullshit phrase he usually throws into written speeches, because he thinks it makes him sound like a deep thinker. It’s not surprising that the administration, including some in the State Department, are coming together to say that L’il Twitler thought this up all by himself. Who’s a big boy? You’re a big boy! But, whatever. He said what he said, no matter who wrote it, and he started a firestorm, the likes of which this world has never seen before! Except, bullshit!

He also makes our allies, like South Korea, nervous as to whether he is going to continue flapping his lying lips and causing unease. I don’t think that anything is going to happen after this latest fuck-up (is anyone going to count how many times I use the word up in this post? I swear, it’s just coincidental). There will be lots of noise and hand-wringing, and then things will go back to abnormal, as always.

One think I did want to touch upon is what I am hearing on TV. Some talking heads have been wondering if this latest drama is part of some super-secret and brilliant strategy. To them I would like to say: What the fuck is wrong with you?

Talking heads, seriously, you haven’t seen enough to finally admit to yourselves that the man in the Oval Office is completely unfit for this job? He is stupid. Really truly unequivocally fucking dumb. Ignorant, incoherent, half-witted, moronic, brainless. Take your choice of those words if it makes you more comfortable saying them on the air, or go to Thesaurus.com and find more synonyms (in alphabetical order!) that you might like more. If you would only say it, you would feel so much better. It’s like taking your underwire bra off after a long day. It feels so good and so freeing, and you can finally breathe!

Every time the moron in the West Wing says or does something stupid (which is every fucking day), we are bombarded with bullshit about some brilliant 12-dimensional chess game that he is playing, and the brash bullshit that comes out of his mouth is just to throw off his enemies. No, it’s not. Not only is he not capable of playing 12-dimensional chess, he would lose at a game of tic-tac-toe, even if he was the only one playing.

Okay, rant and message to the talking heads over.

Just a word about the movie Up. I have a friend who absolutely adores that movie, and I hope that nobody else who is a fan is angry at me. L’il Kim is not a Boy Scout, and he is not cute like Russell. As for Twitler, he is curmudgeonly like Carl Fredricksen, but that’s where the similarity ends. Carl loved his wife Ellie and was faithful to her. There were scenes of Ellie growing old, something that would never happen with Twitler’s wives. Carl did renovate some real estate, but there is no mention in the film that he screwed any contractors or suppliers out of any money. For all of Carl’s brusque exterior, he had a heart of gold. Twitler has no heart and toilets of gold.

If I were you, kids, I would not fret over any kind of nuclear war with North Korea. They still don’t have all the technology they need, and L’il Kim might be nuts, but he knows such a war would mean his own annihilation. I suggest relaxing and maybe watching a movie. May I suggest Up? It’s very sweet and uplifting, nothing like anything you will see on the news today.