There was a picture posted of the alt-right gathering last night in Charlottesville, Virginia. Some people wonder how it, and the murder that occurred today, could have happened. It’s no wonder. This is what I saw: 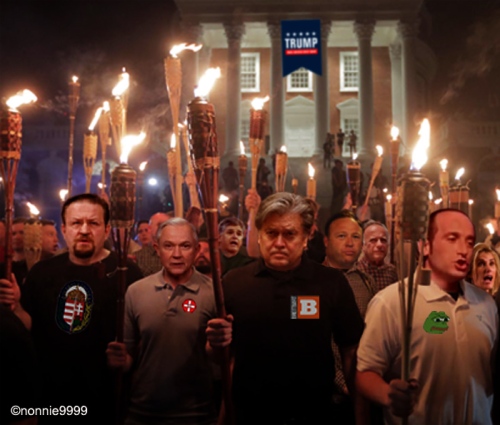 Seriously, Twitler, go fuck yourself. Fuck yourself over and over and over and over again. These were your people, your base, not some other side. You have stocked the West Wing and your cabinet with the most racist, bigoted pieces of shit the country has to offer. You pander to the lowest of the low just to feel like a real man, something you will never be. You are a sniveling ignorant needy asshole who will never fill the void left in you by your shitty parents or by whatever personality defect that lives within you.
Fuck you, GOP politicians who cover for this piece of shit and his people who work so hard to destroy this country so they can reestablish the United States as some new Confederacy or Third Reich. Fuck you for your cowardice and for your hypocrisy. You are wringing your hankies now and clutching your pearls in your shock that something like this could have happened. Fuck you. You knew it would happen, and you did nothing to stop it.
Fuck you, rightwing media for giving permission to the worst among us to feel safe crawling out from under their rocks and flaunting their racism, bigotry, homophobia and misogyny. Fuck you and your fake news. And fuck you, so-called mainstream media. You give microphones to racists and extremists and call it debate. It is not debate. It is giving permission to conspiracy theorists and haters to spread their whackadoodle bullshit to a larger audience and thereby giving them an aura of believablity or respectability. It is your job, if you have forgotten, to tell people the fucking truth and not to chase ratings.
Fuck you, you fucking piece of shit who was driving that Dodge Charger. Your alt-right brethren might pat you on the back and try to make a hero out of you, but you are nothing but a cowardly dickless murderer. May you never have a moment’s peace as you spend the rest of your miserable life in jail while hatred rots you from the inside.
Fuck you, those who were too fucking lazy to vote and those who wasted their votes on a third party because nobody could possibly pass your fucking purity test.
I hope this is still the United States of America where decent people can attempt to live decent lives in peace. I hope that those who hold office wake up and start to govern using their common sense and conscience instead of blindly agreeing to anything that comes out of the mouth of the overgrown toddler in the Oval Office just because he is supposedly in the same party. If they can’t do that, I hope the public votes them out and votes in adults who might have differences of opinion on how to accomplish things but who still remember what this country is supposed to stand for.
I don’t pray, but if I did, i would pray for peace of mind for those who witnessed those horrific events in Charlottesville, solace for the families of the victims and for the police officers killed in the helicopter crash and for this country to find the right path.
Rant over.