Watching Donald Trump being interviewed on 60Minutes shortly after Election Day 2016, eagle-eyed art lovers might have noticed what looked like a painting by French Impressionist painter Pierre-Auguste Renoir hanging on a wall behind the president-elect. The especially astute might have noticed that it looked suspiciously familiar. 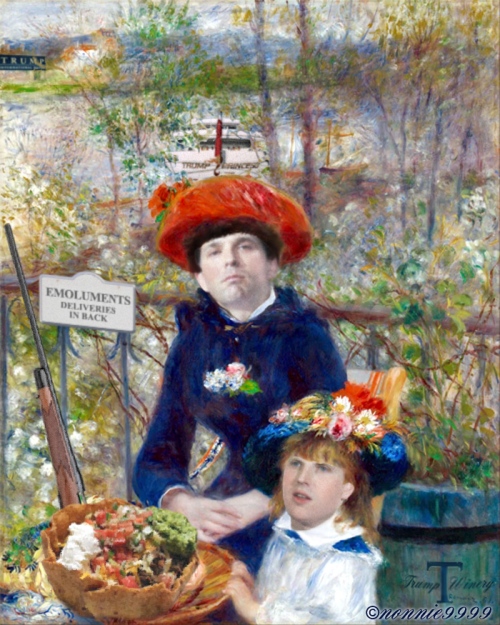 New York Times business reporter Timothy O’Brien had seen the painting before, on Trump’s personal jet, back when the president was still a private citizen. When Trump told O’Brien that it was the genuine article, O’Brien declared, “Donald, it’s not. I grew up in Chicago, that Renoir is called Two Sisters (on the Terrace), and it’s hanging on a wall at the Art Institute of Chicago. That’s not an original.” O’Brien, who recalled the meeting in an interview with Vanity Fair‘s Hive podcast, also remembers that the day after that exchange. He says Trump pointed out the painting again, as though the conversation had never happened. (A representative for the Art Institue of Chicago confirmed that Two Sisters is part of the museum’s collection but declined to comment further.)

Two art historians were willing to comment on the painting. While neither spoke to President Trump’s assertions, their observations leave little doubt about the painting’s authenticity.

Richard Brettell is chair of aesthetic studies at the University of Texas in Dallas, a Yale University Ph.D., director of the Dallas Museum of Art, and author of several books on Impressionism. His verdict? It’s a fake.

This isn’t the first time the authenticity of Trump’s art collection been called into question. In April 2016, the New York Post reported that a version of Renoir’s 1874 canvas La Loge (The Theater Box) adorned Melania Trump’s Fifth Avenue apartment. The original, however, hangs at London’s Courtauld Art Institute. […]

According to Vanity Fair’s Mark Bowden, Trump once bragged to the reporter that a “Renoir” hanging on the wall of his private jet was “worth $10 million,” pointing to the signature. Bowden didn’t specify the painting’s title at that time.

O’Brien, for his part, was quite willing to draw conclusions about Trump’s state of mind for the Vanity Fair podcast.

“He believes his own lies,” O’Brien said, “in a way that lasts for decades.”