Where shopping is no longer a pleasure

Some Floriduhhh news, from The Buzz at the Tampa Bay Times:

The Florida supermarket giant Publix has given more money to Adam Putnam’s gubernatorial bid than any other candidate since at least 1995 and likely for the entirety of the company’s history.

Publix, the heirs to the company’s founder and its current and former leaders have given Putnam $670,000 in the last three years — or enough money to buy 74,527 chicken tender subs.

I thought they might want to update their logo.

The employee-owned company has also helped bankroll a handful of well-connected business groups who have contributed millions of dollars to the Republican candidate.
…snip…
Publix has backed Putnam since his first race as a 22-year-old, a successful campaign for state House of Representatives in 1996. It wrote Putnam a check for $500, according to state records.
The more recent contributions came as Putnam oversaw regulation of the company’s 785 stores. The Department of Agriculture and Consumer Services that Putnam leads conducts health safety inspections at grocery stores. It also handles consumer complaints directed at food businesses, including supermarkets.
In 2016, WFTS-Channel 28 discovered seven Tampa Bay area Publix stores failed health inspections. In those stores, food inspectors found rodent droppings, hundreds of pounds of meat and other food stored at unsafe temperatures, bugs and employees not washing their hands, according to the report.
Putnam responded the next day by pulling the inspections from the department’s website and eliminating the pass/fail grading system.
…snip…
Political Action Committees like FRF Political Committee, Florida Jobs and Florida Prosperity Fund have given millions of dollars to Putnam from a war chest made up of six-figure contributions from Florida Power & Light, U.S. Sugar and others.

Here’s a little about that little putz Putnam, from his own Twitter feed: 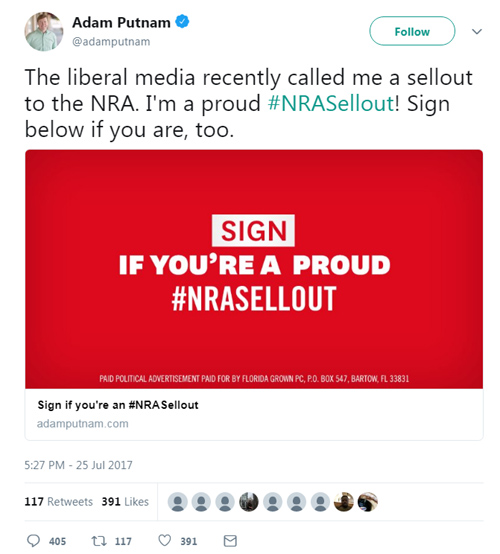 The grocery chain has tried to walk this back with the following statement:

We are a company that cares about our associates, customers and the communities we serve. It is our mission to do our very best to please all Publix customers, but unfortunately in today’s complex world this is not always an easy task.

Recently, stories have circulated on social and traditional media channels regarding Publix’s contributions to Adam Putnam in Florida’s Gubernatorial race, and his positions on certain issues. We support bi-partisan, business-friendly candidates, regardless of political affiliation and we remain neutral on issues outside of our core business.

We serve customers with varying points of view and understand the sensitivity that can surround political topics. We appreciate the trust you place in allowing us to be your grocer of choice and your community partner.

One of the associates they claim to care so much about was named Cory James Connell. He died in the Pulse nightclub. Publix’s paid-for politician (if they buy one, do they get one free?) tweeted the above image a little over a year after the Pulse massacre. The little shithead also hates immigrants and echoes Twitler’s lies about undocumented people voting in droves. I bet all those associates at Publix who were not born in this country (and whom they care about so deeply) are thrilled that their bosses are backing a bigoted asshole. And that’s just the tip of the iceberg when it comes to Putnam.

Good thing there are a lot of supermarkets here in Floriduhhh.

7 responses to “Where shopping is no longer a pleasure”