I wish I was making this up, kids. From Vox:

While boarding an Air Force plane to visit migrant children at the Texas-Mexico border on Thursday, Melania Trump wore a jacket with the phrase “I really don’t care, do u?” scrawled on the back, as reported earlier by the Daily Mail.

She left her hat on the plane. It is also from the Marie Antoinette Collection at Zara, the same fashion house that made her $39 jacket.

Here’s the jacket and the original: 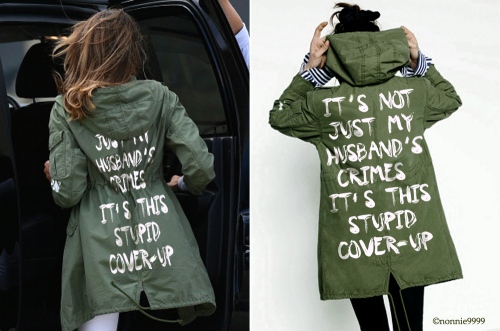 It’s a bizarre and insensitive choice both for the nature of the occasion and in a cultural moment where public outrage for Trump’s “zero tolerance” family separation policy is fervid and widespread.

The jacket isn’t only notable for its seemingly offensive phrase — it’s notable because the first lady has a tendency to wear exclusively high-end designers like Dolce & Gabbana and Valentino when she appears in public.

This isn’t the first time Melania Trump has caused controversy with her wardrobe choices. She famously wore stiletto heels while traveling, coincidentally, to Texas previously to survey the damage from Hurricane Harvey. (On Thursday, however, she wore Adidas Stan Smith sneakers.)

I honestly don’t know why she unbent her feet to fit into sneakers when some in the media have the bar for her lowered so far down that she could easily step over it while wearing her usual sky-high heels.

Trump’s spokesperson Stephanie Grisham addressed the jacket worn earlier in the day when asked. “It’s a jacket,” she reportedly said. “There was no hidden message. After today’s important visit to Texas, I hope this isn’t what the media is going to choose to focus on.”

Nope, no hidden message. It was finally out in the open for all the world to see.

It’s hard to believe that nobody involved — Melania herself, her stylist Hervé Pierre, or her spokesperson — couldn’t have foreseen the backlash to such a jacket. Yet in an administration characterized by equivocation and outright falsehoods, it’s not that surprising to hear that it’s hoping people ignore a statement that’s literally printed on a jacket.

Plus, in an essentially infinite world of fast-fashion jackets, why wear one that implies you don’t care about the issue you’re on your way to deal with?

Maybe to deflect attention once again from the fact that her husband put babies and toddlers in detention camps? Better to talk about Malaria’s fashion choices than to think about little kids getting injections of psychotropic drugs? Or maybe we aren’t supposed to focus on kids being tortured by the United States of America?

Since you’re here, kids, maybe you want to click over to read Charles Blow‘s take on Twitler and Malaria. He points out that she had no qualms about wasting millions of dollars of taxpayer money so her little snowflake Barron wouldn’t suffer the horrible trauma of having to change exclusive private schools in the middle of the school year, because that is so much worse than innocent children being ripped from the arms of their parents in a strange place.